Gracenote’s Virtual Medal Table forecast for the Summer Games in Tokyo was suspended in March 2020. The last projection can be found here and we will endeavour to update in March 2021. 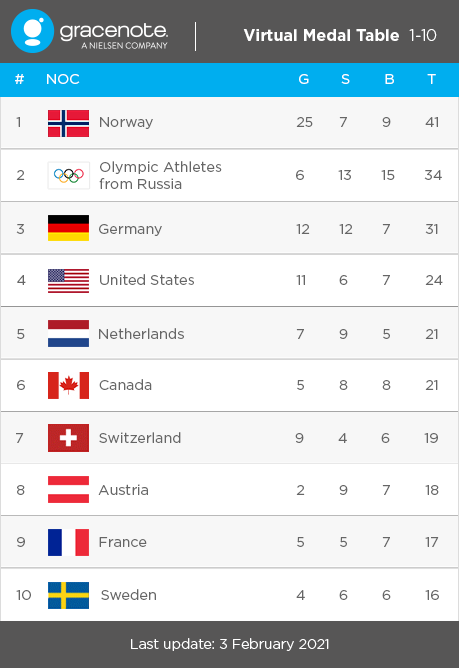 The Gracenote Virtual Medal Table is a statistical model based on individual and team results in previous Olympics Games, World Championships and World Cups to forecast the most likely gold, silver and bronze medal winners by country. This information is presented in simple to understand predictions and seamless data feeds that enable broadcasters, media publishers and pay TV operators to deliver unique Olympic-focused stories across Web, mobile and broadcast properties.

(2022 projection: 41 medals, 2018: 39 medals)
Norway is forecast to break its record-breaking total of 39 medals in PyeongChang three years ago. Cross country skiing and biathlon will be the key sports for the Norwegians if they are to achieve this target. Currently, 28 medals are forecast for Norway in those two sports.

(2022: 34 medals, 2018: 17 medals)
Russian athletes are allowed to compete at the Beijing Winter Games under the Olympic flag. Assuming that all of those currently in top three positions on the Gracenote Virtual Medal Table fulfil the requirements to participate, 34 medals are forecast. This would be twice as many as in 2018 and more than any Russian or Soviet team managed at a Winter Games. The Russians look particularly strong in speed skating this time around with eight medals forecast.

(2022: 24 medals, 2018: 23 medals)
Three years ago, the United States won fewer overall medals at the Winter Olympics than neighbour Canada for the first time since 1998. The 1998 and 2018 competitions were the only Winter Games in which the United States won fewer medals than Canada. Current Gracenote projections suggest this should not happen again in 2022 but the two countries are close.

(2022: 21 medals, 2018: 20 medals)
The Netherlands is projected to improve slightly on its performance at the 2018 Winter Games, winning 21 medals in 2022. Dutch performance is, as usual, heavily reliant on speed skating and short track.

Countries Ranked 6 to 10 on the Medal Table

(2022: 21 medals, 2018: 29 medals)
Canada had its best-ever Winter Olympics in 2018 in terms of total medal count. The forecast of 21 medals for Beijing 2022 would be Canada’s worst return since Salt Lake City 2002. Canada has a broad set of sports in which medals are projected with freestyle skiing, snowboard and speed skating looking the strongest.

(2022: 19 medals, 2018: 15 medals)
Switzerland’s 15 medals at the 2018 Winter Games matched the country’s best Winter Olympic performance in 1988. Current Gracenote forecasts suggest an even better performance in Beijing next year with 19 medals projected for the Swiss. Alpine skiing and freestyle skiing are the key sports if Switzerland is to achieve a new Olympic record number of medals.

(2022: 18 medals, 2018: 14 medals)
Austria is forecast to win four more medals at Beijing 2022 than it did three years ago in Pyeongchang. This is, in part, due to the country’s competitiveness in more sports present at the Winter Games. Gracenote forecasts medals for Austria in seven different sports in Beijing which would equal the country’s record set in 2010.

(2022: 17 medals, 2018: 15 medals)
France’s two best Winter Olympic performances were in 2014 and 2018 when the French team took home 15 medals. Next year, Gracenote forecasts France to improve upon this and win 17 medals. Biathlon and freestyle skiing are the key sports for France if the country is to achieve a new record number of medals in a year’s time.

(2022: 16 medals, 2018: 14 medals)
Rounding out projected top-10 medal winners next year is Sweden. If Sweden can win 16 medals in Beijing, it would be the country’s best Winter Games performance.. In Winter Games competition, Italy’s female athletes are particularly strong. Twelve medals are projected to go to Swedish women and another one in the mixed events. 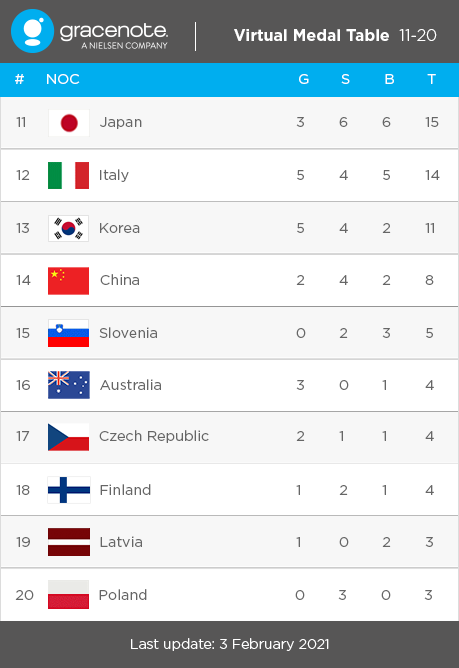 Medals in New Events Likely to be Won by Many NOCs

Seven new events are being introduced at the 2022 Winter Olympics which brings the total number of medal events up to 109. Gracenote projections for Beijing 2022 suggest that the extra medals from these events will be distributed across 11 different NOCs.

It appears Canada and Sweden will be the only NOCs forecast to finish in the top-10 medal winning countries not profiting from any of the new events on the programme. However, Canada is currently in sixth place in the women’s monobobsled projection and five of the six other new events have a Canadian ranked in the top eight. The Swedes have a contender in the Men’s big air freestyle skiing event as Henrik Harlaut is projected fifth position.

Switzerland appears to be the main beneficiary of the new events. Switzerland is the only NOC forecast to win two gold medals in events debuting at Beijing 2022. The Swiss team is in pole position in the mixed team aerials freestyle skiing event and the women’s big air in freestyle skiing. 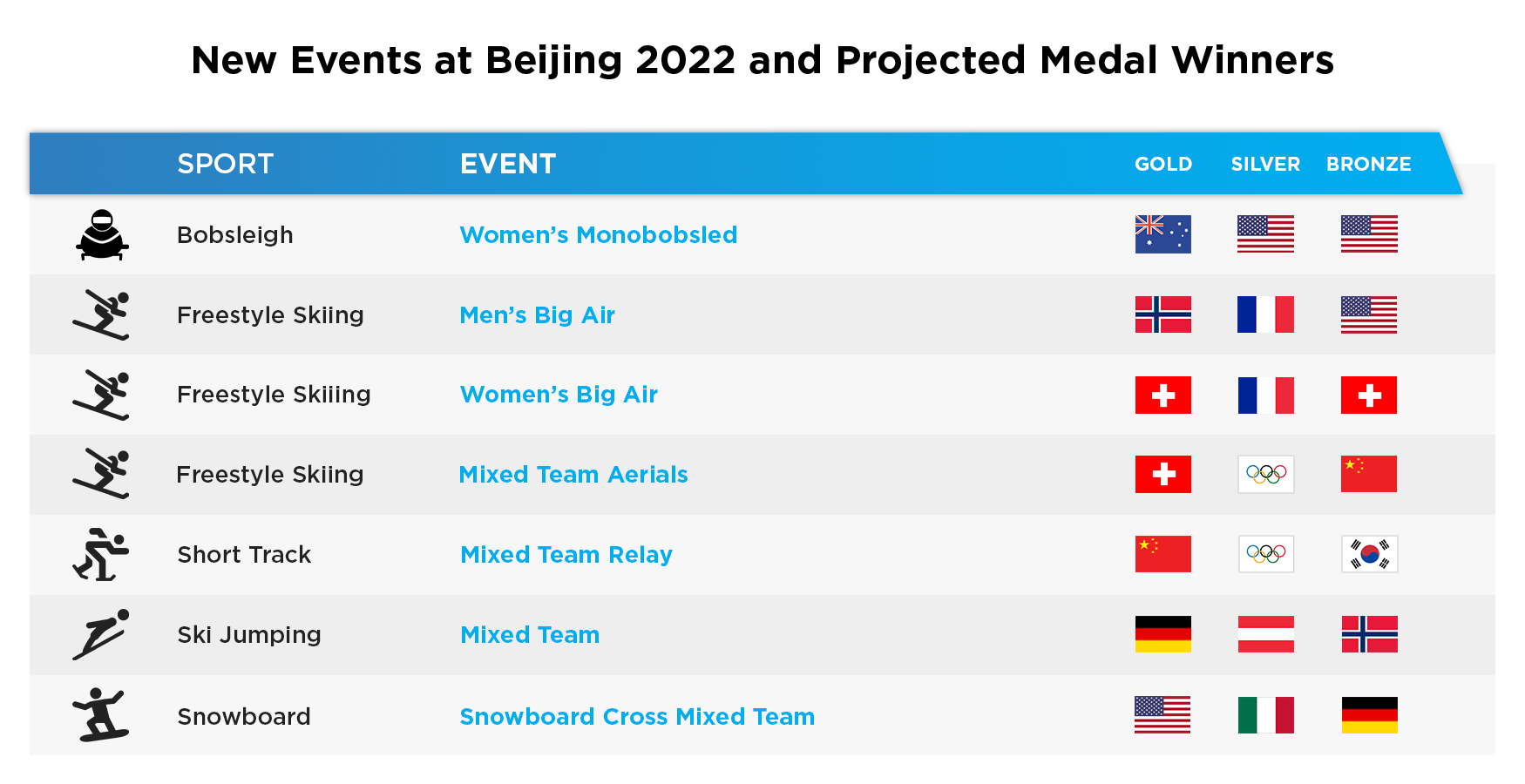 The host nation of the 2022 Winter Olympics, China is currently forecast to win a similar number of medals in Beijing as in Pyeongchang in 2018. Generally, host nations have been able to improve their medal counts over preceding games, often significantly. In fact, five of the last nine host nations have won at least twice as many medals than they managed at the previous Winter Games. But current data does not show Chinese athletes delivering such an improvement in a year’s time.

China won nine medals total at the 2018 Winter Olympics in Pyeongchang. Three years on, the Chinese team is projected to win eight at Beijing 2022.

China medal chances in Beijing are therefore probably restricted to curling, figure skating, freestyle skiing, short track, snowboard and speed skating. To double the number of medals China won in 2018, three quarters of the participants and teams ranked in Gracenote’s top eight in these sports would need to finish in the top three. 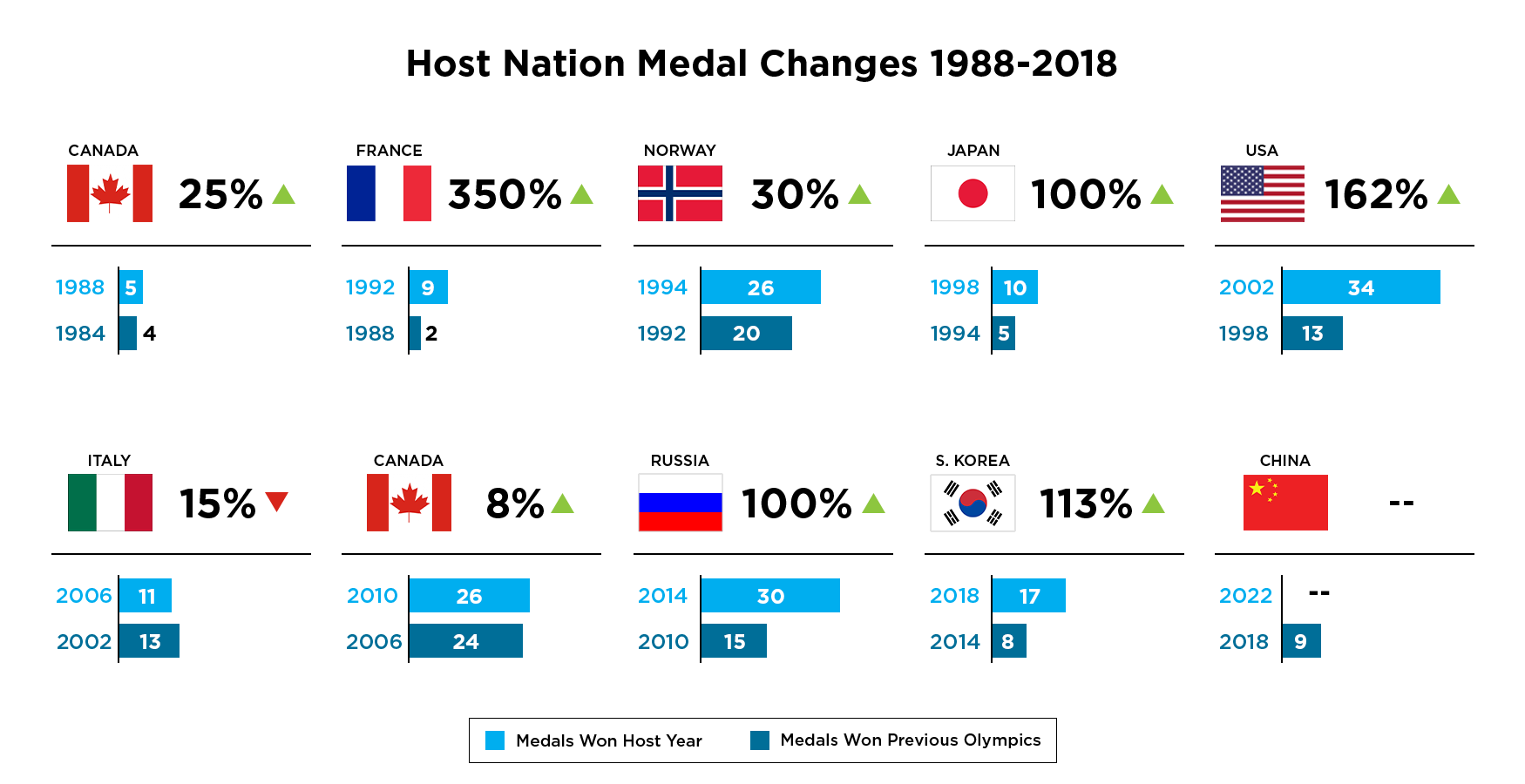 Gracenote, a Nielsen (NYSE: NLSN)  company, is the world’s leading entertainment data and technology company. The hottest entertainment products and brands around the globe rely on Gracenote’s music, video and sports content and technologies. Gracenote is the standard for music and video recognition and is supported by the largest source of entertainment data, featuring descriptions of more than 200 million tracks, TV listings for 85+ countries and rich statistics from 4,500 sport leagues and competitions. Headquartered in Emeryville, California, Gracenote supports customers around the globe. For more information on Gracenote Sports, visit https://www.gracenote.com/sports/global-sports-data/.

Want to get in contact with Gracenote about our services?