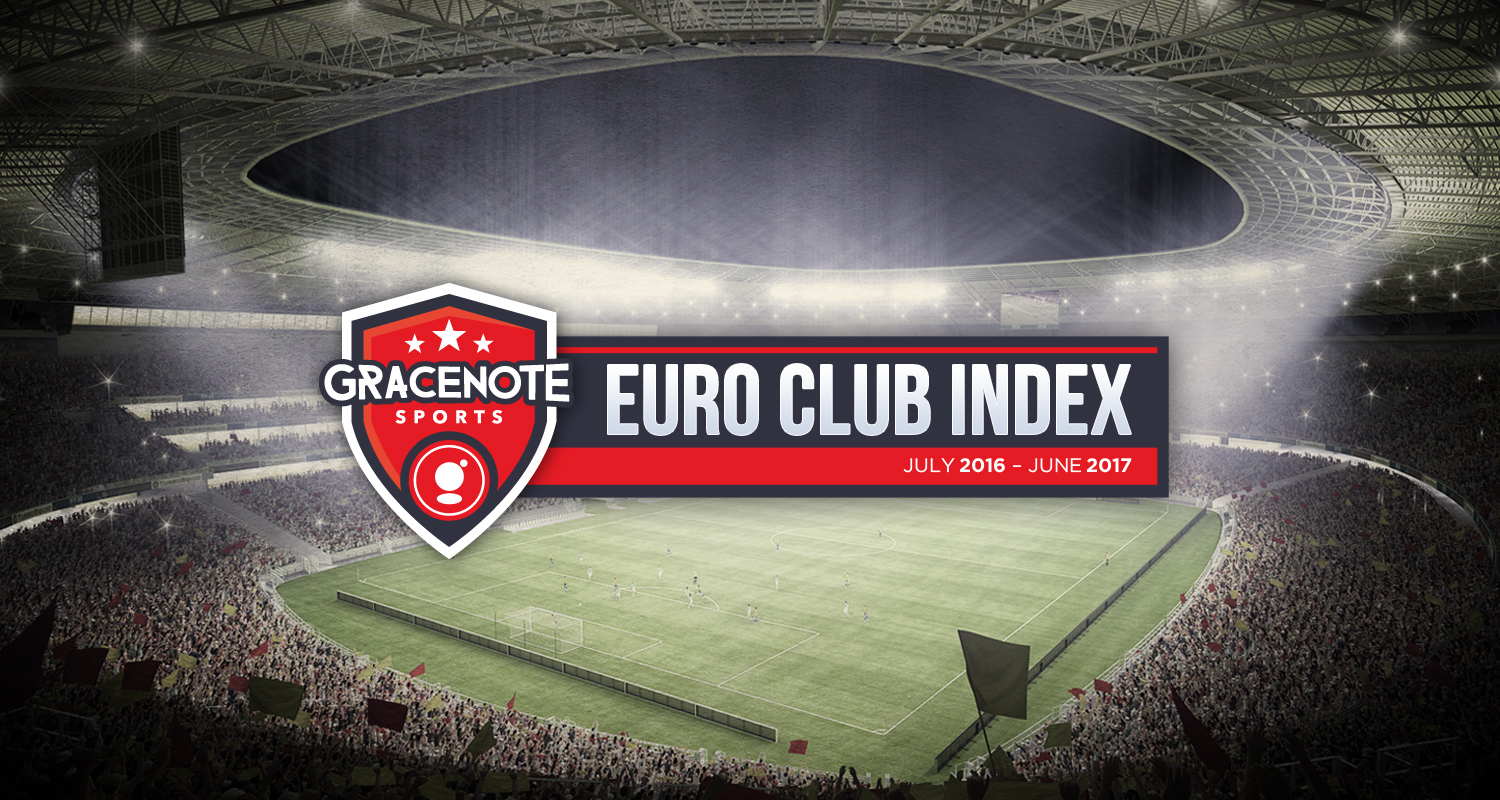 Top Headlines for All Clubs, Leagues and Countries 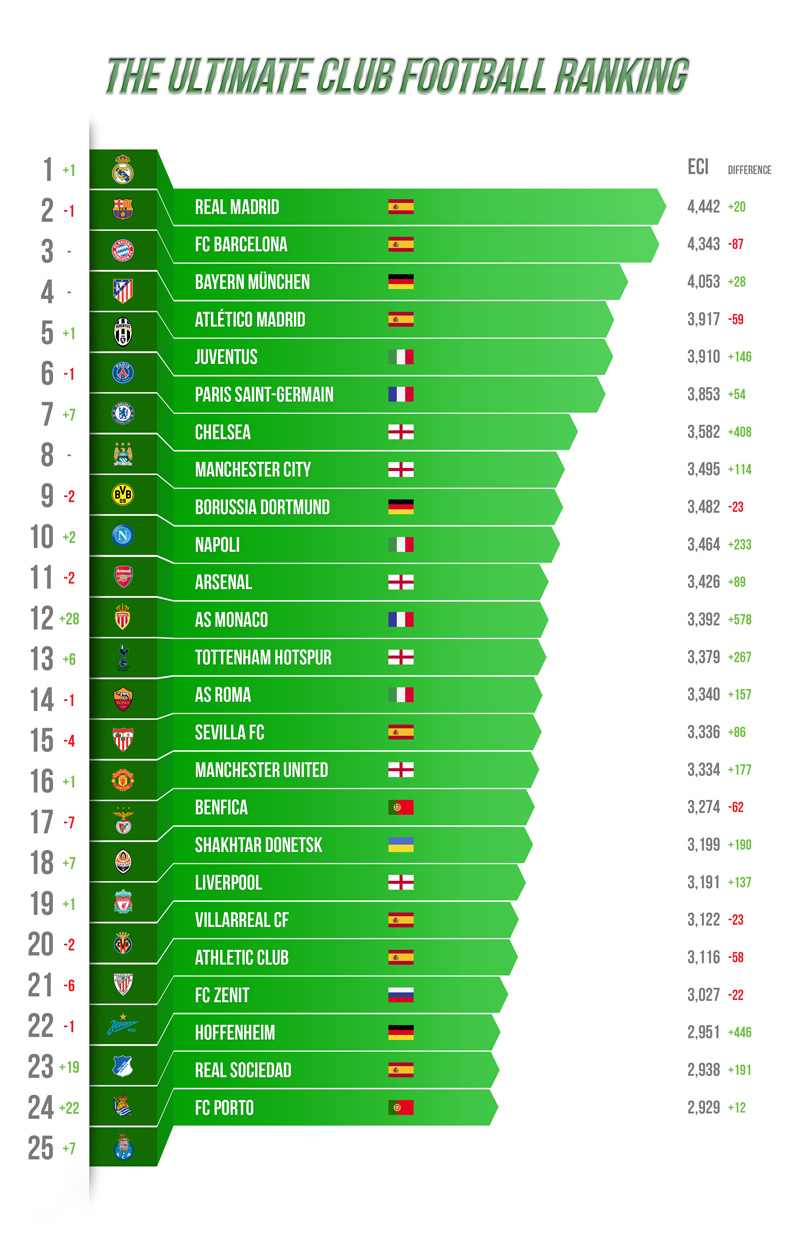 Breaking Down the Top Leagues

Despite a slight decline this season, Spanish clubs still lead Europe with Real Madrid and FC Barcelona, the number one and two teams in the Euro Club Index rankings, and Atlético Madrid number four. Spanish champions Real Madrid have overtaken FC Barcelona for the top spot on the table this season.

Four other La Liga clubs – Sevilla, Villarreal, Athletic Club and Real Sociedad – are currently ranked in Europe’s top-25. Despite the fact that five Spanish representatives in Europe’s top-25 slipped in the rankings this season, no other competition has so many clubs in this elite group.

As a whole, La Liga, Spain’s top league, weakened slightly in 2016/2017 with the average Euro Club Index rating of teams decreasing from 2,814 to 2,791. In addition to seven clubs in the top-25, the competition has the most (nine) of any league in the top-50. Fifteen of La Liga’s 20 clubs are ranked in the best 100 in Europe, a total surpassed only by Germany’s Bundesliga.

The Euro Club Index ratings for both Bayern Munich and Borussia Dortmund have gone down slightly this season. Still Bayern remain the third-best team in Europe. Dortmund, despite dropping two spots, are still in the top-10.

Germany has only one other club, Hoffenheim, in the Euro Club Index top-25. By qualifying for the Champions League for the first time in their history, Hoffenheim jumped from 71st rank in Europe to 23rd.

The other surprise Champions League team is RB Leipzig. Their leap of 142 places to 58th this season is impressive. With no end in sight to Leipzig’s rise, there is reason to believe they will continue to improve their position in the rankings next term.

As a whole, Bundesliga has more teams in the current Euro Club Index top-100 than any other competition (16). Only the two relegated clubs, Ingolstadt and Darmstadt, are not present in the top-100. The average Euro Club Index rating of the 18 Bundesliga clubs this season improved from 2,706 to 2,739.

The English Premier League is the other European competition with heavy representation at the top of the Euro Club Index rankings. However, the best English clubs still lag behind the best from Spain and Germany. England’s top-ranked club, Chelsea, are only seventh on the current table.

Chelsea overtook Manchester City during the season to become England’s highest ranked club in Europe. But it will take at least one more season at this performance level for an English club to challenge the continent’s best teams again in the Euro Club Index rankings.

A total of eight Premier League teams are present in Europe’s best 50. Fourteen of the Premier League’s 20 clubs are represented in the Euro Club Index top-100, one fewer than La Liga and two fewer than the Bundesliga.

Serie A champions Juventus are Italy’s highest-ranked club in fourth position. Napoli join them in the top-10 having risen two places during the season. Considering only the best 18 Premier League clubs, the average rating is 2,744 – slightly higher than the average of the 18 Bundesliga teams.

The quality of Serie A as a whole is relatively unchanged with the average rating of its 20 clubs increasing ever so slightly from 2,504 to 2,512. The fourth-best football competition behind La Liga, Bundesliga and the Premier League, Serie A has eight teams in the Euro Club Index top-50 and 11 in the top-100.

Ligue 1’s Paris Saint-Germain (FRA) and AS Monaco (FRA) along with Benfica (POR), Shakhtar Donetsk (UKR) and FC Zenit (RUS) complete the top-25 clubs in Europe. Four were present in the top-25 rankings last summer. The newest member of this rarefied group are newly-crowned French champions Monaco who have sprung from 40th to 12th position in Europe.

Monaco are the highest-ranked of the four new teams in the top-25 this year followed by Hoffenheim (23rd), Real Sociedad (24th) and FC Porto (25th). The clubs they displaced are Bayer Leverkusen, Borussia Mönchengladbach, Dynamo Kyiv and VfL Wolfsburg. Based on these changes to the top-25, Bundesliga representation has decreased from six clubs to three.

Serie A Now on Par with Premier League in Top-50

At the end of the 2015/2016 season, Spain and England each had nine clubs in the Euro Club Index top-50, two ahead of Italy and Germany with seven each. Over the course of this season, Southampton have dropped out of the top-50 without another English club entering. Italy has retained its seven representatives, but added Atalanta who finished fifth in Serie A. The top Italian league is therefore on par with the Premier League now in terms of clubs in Europe’s top-50. However, England has six teams in the top-25 compared to Italy’s three. 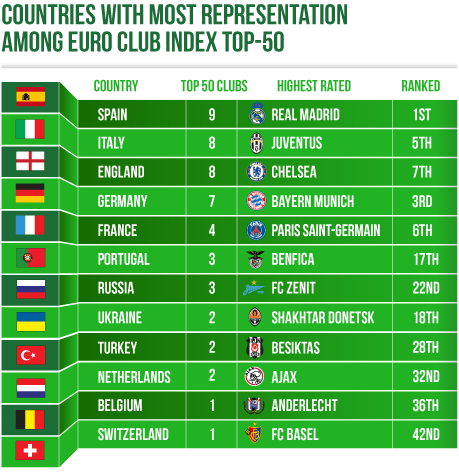 In total, 12 countries have clubs ranked amongst the best 50 in Europe. This is one fewer than a year ago as the two Czech clubs who were there in July 2016 have both dropped out as has Greek team Olympiacos. Belgium is new to the top-50 this season with Anderlecht now ranked 36th. 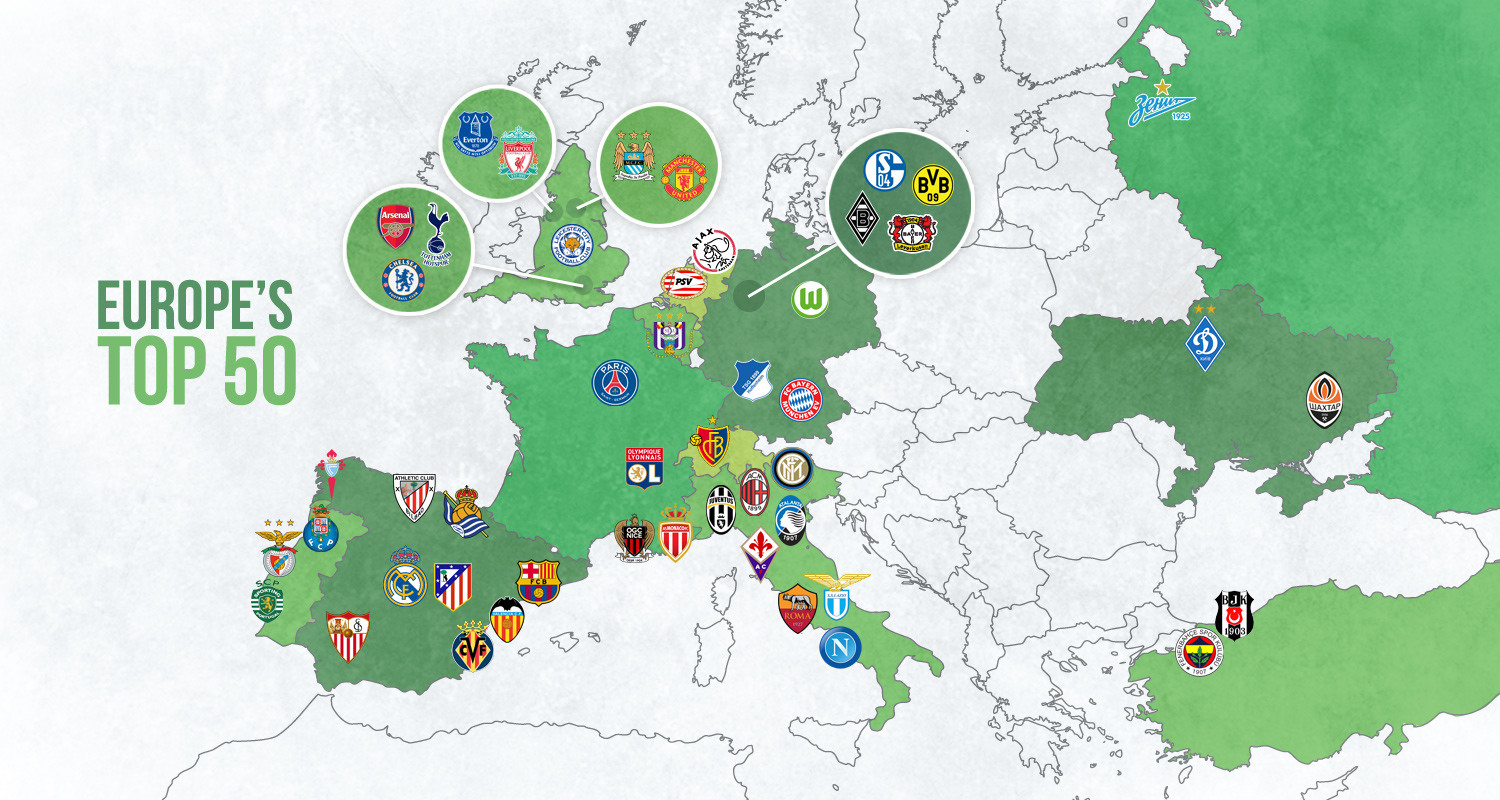 RB Leipzig are the biggest improvers this season according to the Euro Club Index rankings. The Bundesliga debutants ascended from 200th position to 58th by gaining 702 points. New French champions Monaco added 578 points to their Euro Club Index rating and improved from 40th to 12th.

Alavés were promoted to La Liga at the end of last season and finished a surprising ninth. Based on this performance, the club’s rating increased by 478 points making them the 72nd best team in Europe according to the Euro Club Index. Hoffenheim’s improvement began in 2015/2016 after the appointment of head coach Julian Nagelsmann in February 2016. The club’s fourth place in the Bundesliga competition this season was in stark contrast to their position at the bottom of the table just 15 months ago. Consequently, Hoffenheim enjoys its highest-ranking ever in European football with only 22 teams regarded as better.

Due to the fact that it is much more difficult for a club to improve its position at the top part of the table, Chelsea’s strong performance led to only a seven place rise in the Euro Club Index rankings. A similarly dominant 2017/2018 season will probably only produce a move up of two or three places for the Premier League champions.