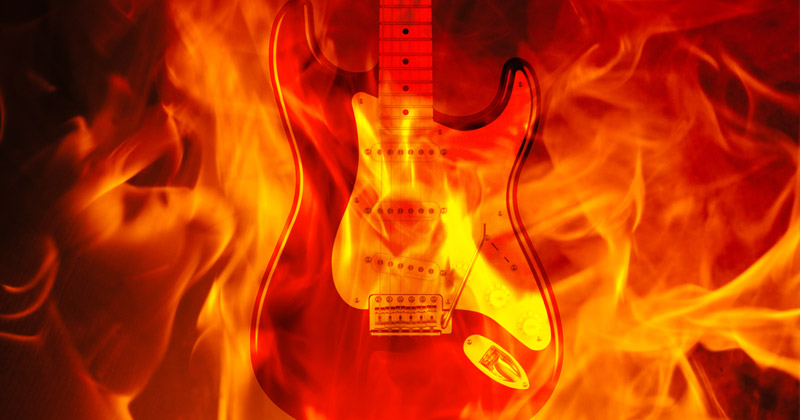 The Applied Research Team at Gracenote focuses on new technologies that can help spawn new product ideas and improve existing products. We are the keepers of many of the company’s smart algorithms which enable media identification, audio, image, and video analysis, as well as data mining. This post is a window into one of our projects, exploring different aspects of Gracenote’s music data, and our efforts to interpret and improve it.

A recent Wall Street Journal article called Metal “the unlikely soundtrack of globalization” and highlighted artists in regions of the world not commonly associated with the genre. Punctuated by distorted guitars, powerful vocals, complex drums and a larger-than-life stage presence, the genre is frequently labeled as music for ‘outsiders.’ which makes it easy to ignore how large and diverse Metal has become since. The genre has been gaining mainstream attention as evidenced by NPR Music premiering Deafheaven’s second album, “New Bermuda,” and Spotify asserting the genre has the most loyal listeners. Let’s dig into the world’s largest database of recorded music to understand the global Metal phenomenon, and put it into context with other genres of music.

Attributes like ‘Mood’ are derived from Machine Listening algorithms which work on audio and are trained on data created by music experts (the topic of another blog post).

Attributes are structured into hierarchies with varying levels of detail to abstract their complexity allowing for analysis at multiple levels. We use a three-level hierarchy to group more than 2000 genres at the most granular level. For example, going from less detailed to more detailed, Grindcore would be organized as Metal -> Extreme Metal -> Grindcore, and Ambient Trance would be Electronica -> Trance -> Ambient Trance. We use four-level hierarchy for Origin (e.g. North America -> United States -> California -> San Francisco).

Using the Origin at the country level, we can visualize how the artists are distributed across the globe for a set of Genres.

Where does our Music come from?

We start our journey by taking the subset of Gracenote data that has been editorially annotated for Genre and Origin fields, and create choropleth maps for each of 15 high level genres. For the purpose of this visualization, we transformed the number of artists by taking the logarithm (base 10) and then normalizing it into a 0-1 range per genre. “0” translates into no artists for that genre, and “1” corresponds to the country with the highest number of artists for that genre. The plots allow for a visual comparison of the distributions (relative magnitudes across countries) for different genres.

We caution against making any deductions across genres. For example, it is incorrect to conclude that Russia has more Classical music artists than Metal from this data alone, but it’s safe to say that Sweden has more Metal artists than India. 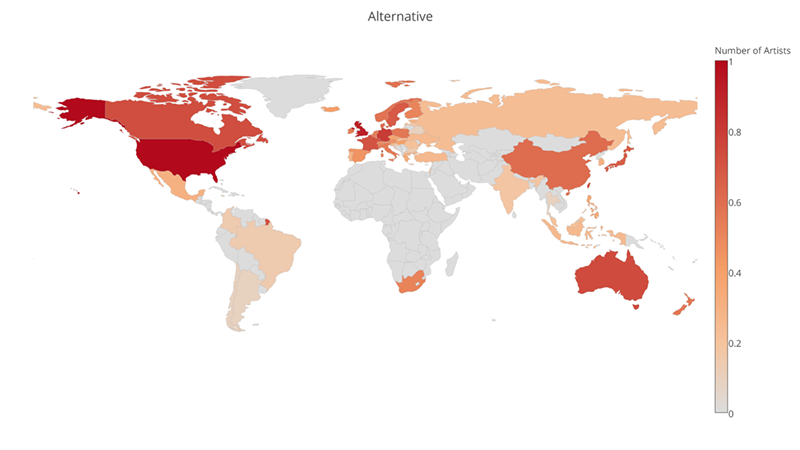 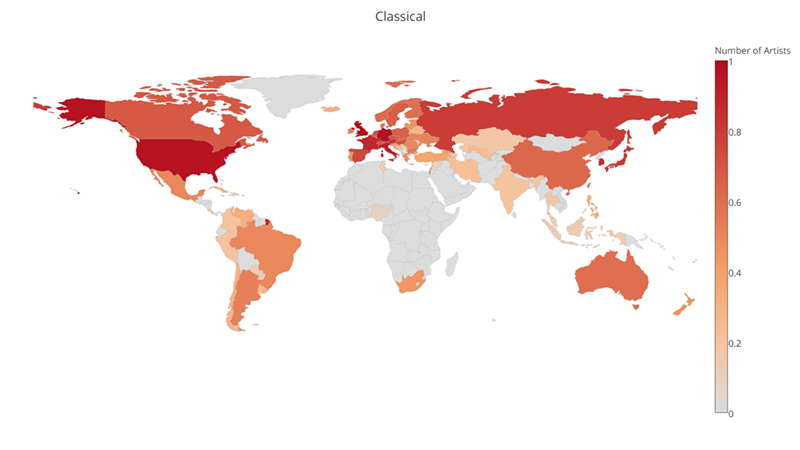 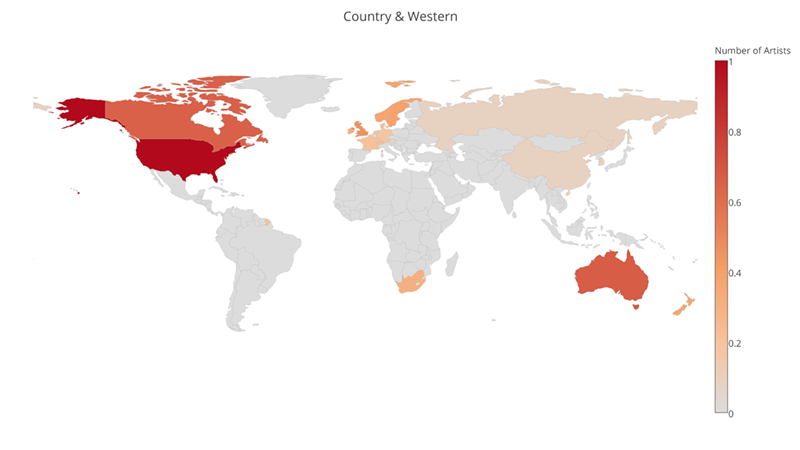 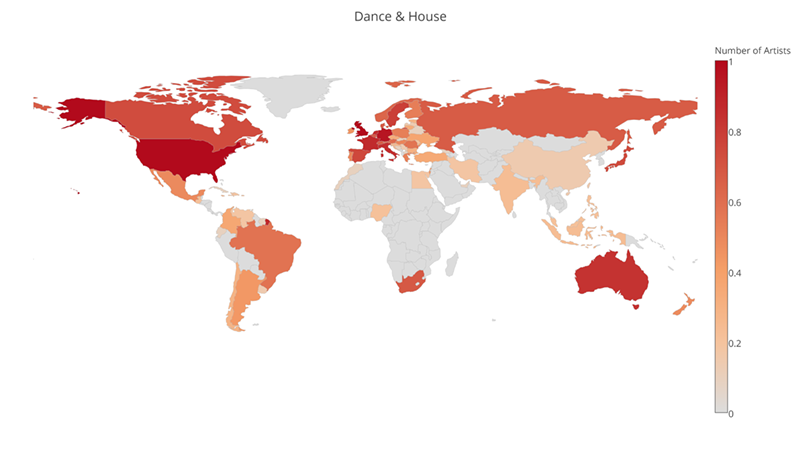 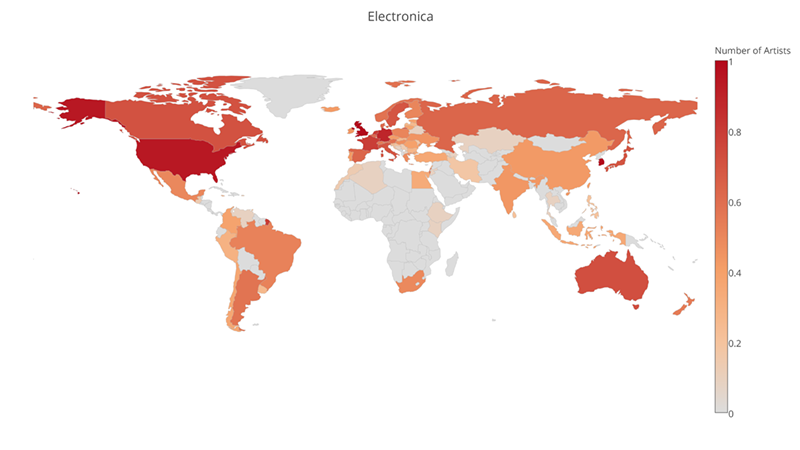 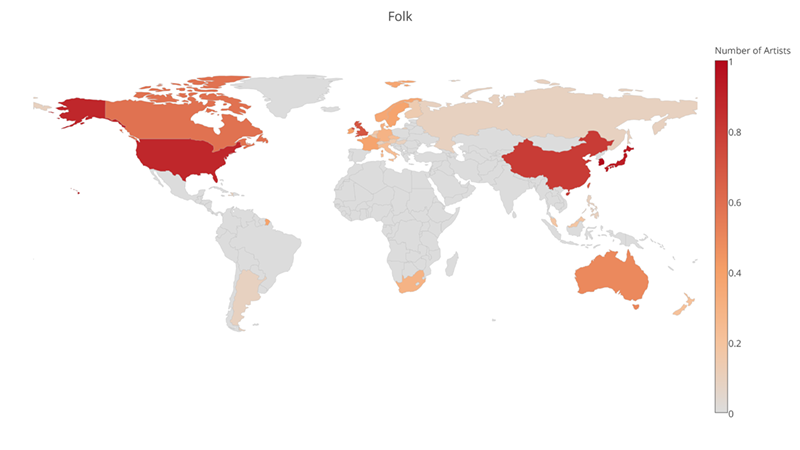 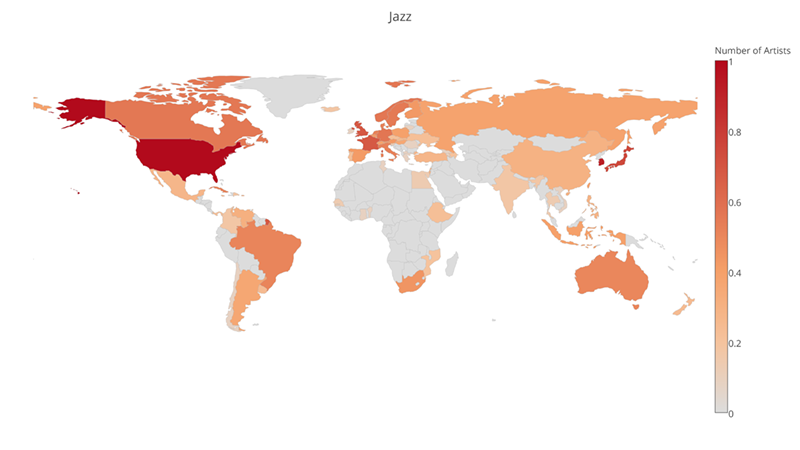 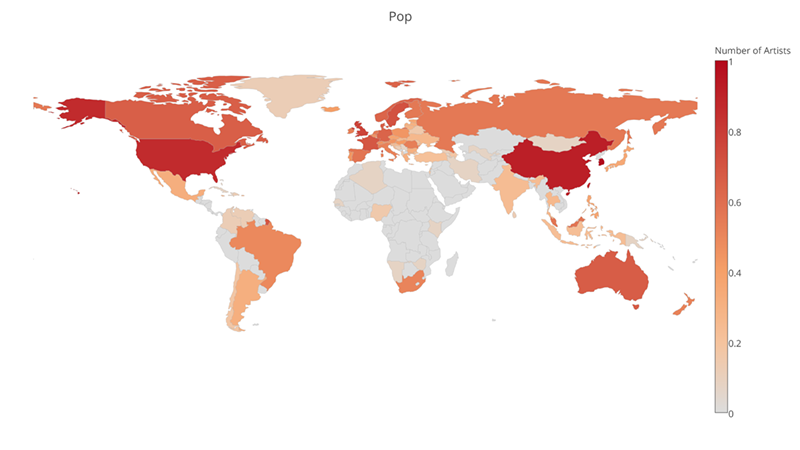 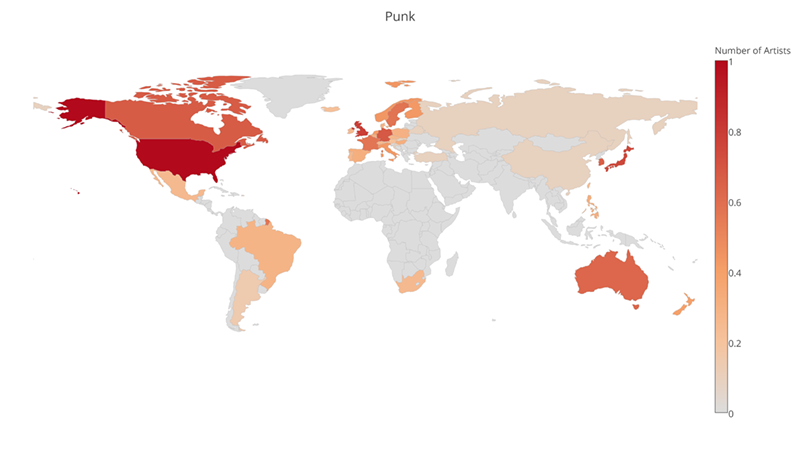 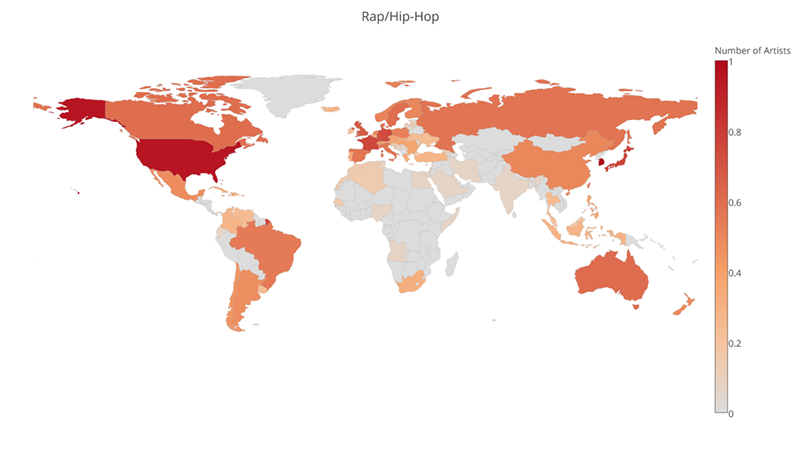 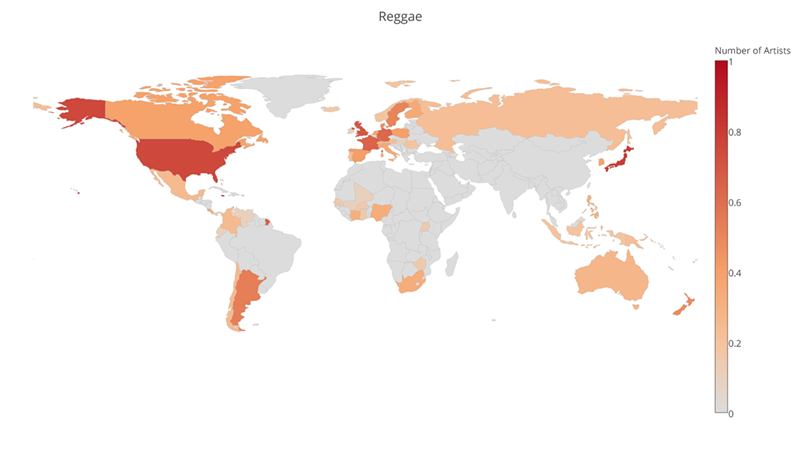 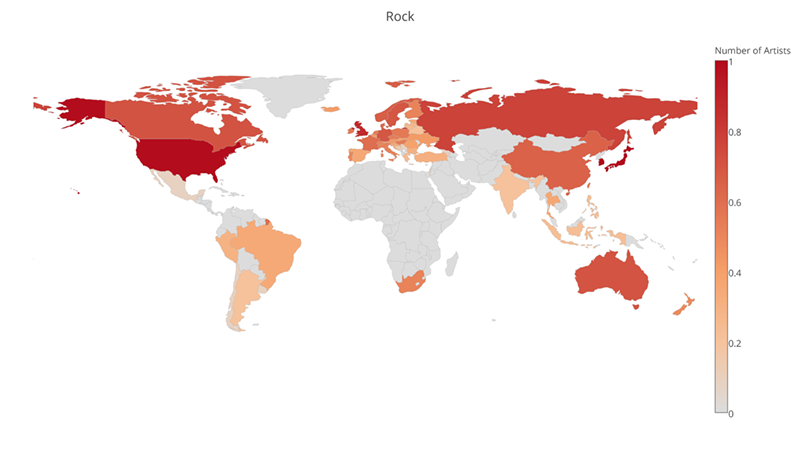 Let’s define the most global genre as the one that has artists originating from the most number of unique countries. The aforementioned transformation makes it hard to directly compare the genres in the choropleth maps, so we’ve created a bar chart of the number of unique origins (countries) for the artists in each genre. 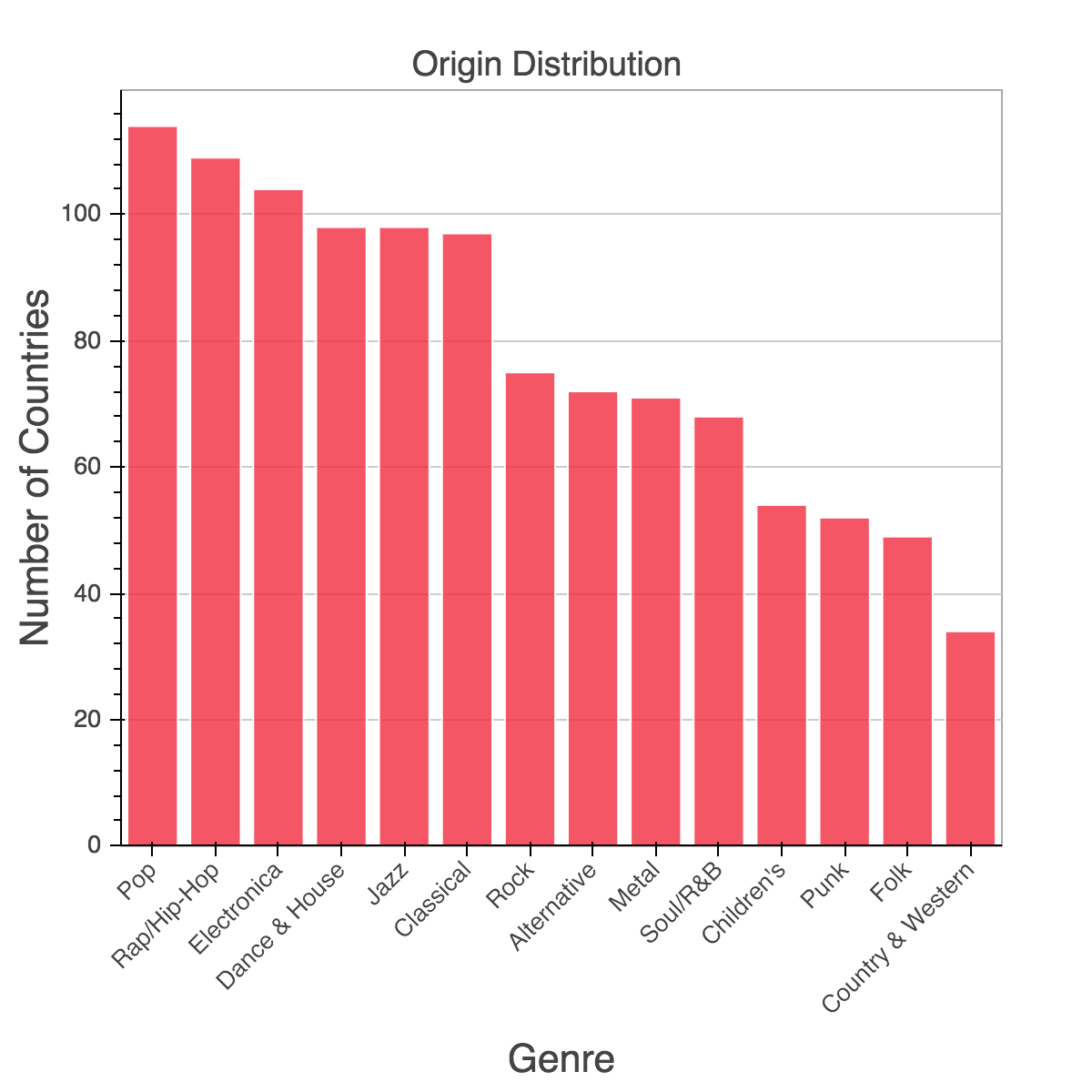 Pop leads the charts, and Metal is in the bottom half of the list. What could be going on here? Let’s investigate...

One of Gracenote's most important data sources is a feed of new album releases from our content partners (primarily record labels) which is driven by the markets our customers are most active in. This is the dominant source of the data you've seen thus far. A large portion of Metal albums don’t make it into Gracenote’s database through these conventional channels because many fledgling Metal artists in local scenes are not associated with a record label. A growing number of artists choose to be independent, crowd-funding their releases (e.g. Alkaloid, Conquering Dystopia, Protest the Hero) and releasing digitally to avoid labels altogether.

One of the ways we can make up for this deficit is by mining data from the Internet. Metal has a very dedicated fan base with countless blogs catering to this audience and their unquenchable thirst for new music. By collecting and merging information from multiple sources across the web, we collect data about artists that may be missing from our regular feeds. (We can actually learn a whole lot more than just which country an artist is from, as future blog posts in this series will reveal.) What does this fresh source of data do for Metal? 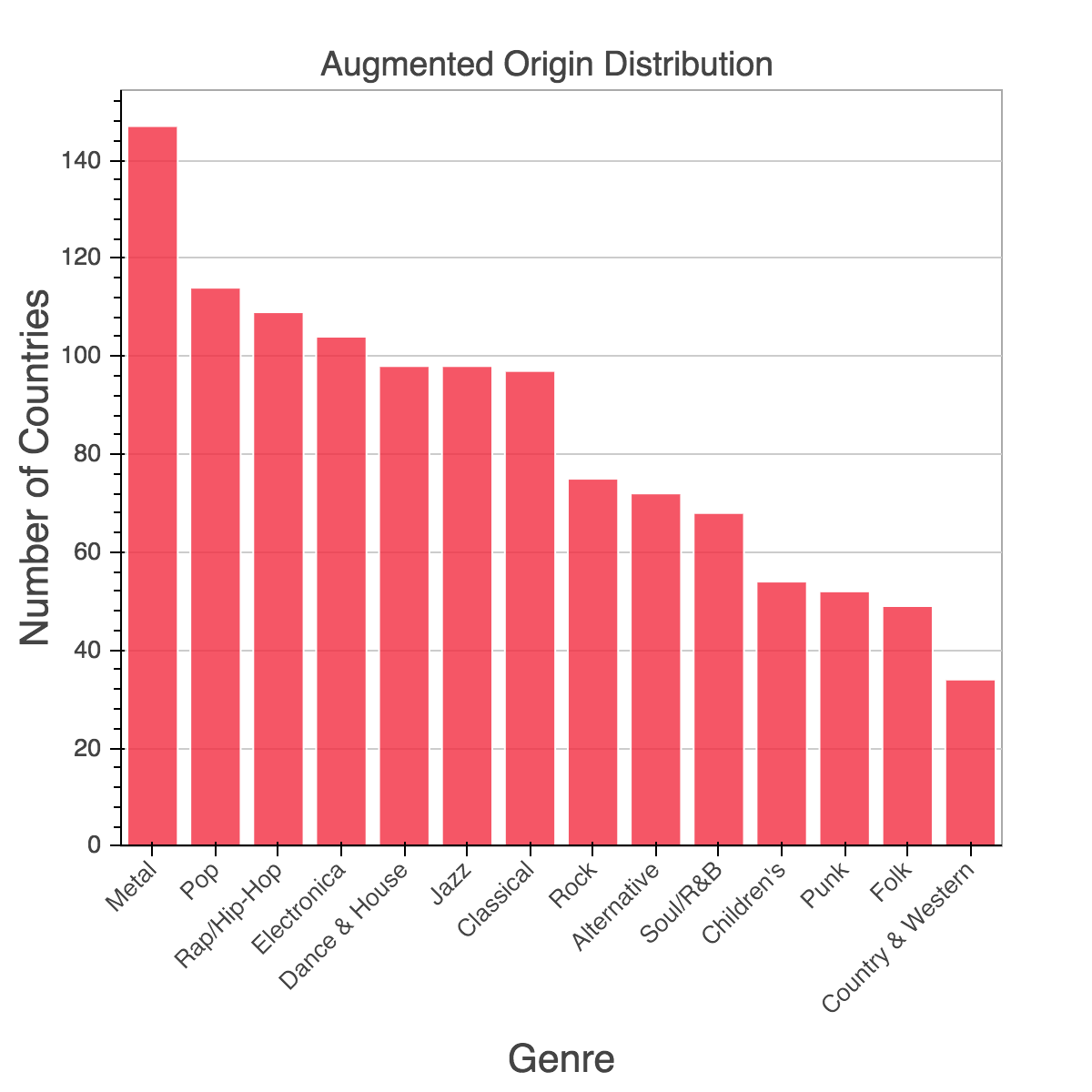 With the help of augmented data, Metal makes a huge leap towards the top of the charts revealing that the genre is in fact significantly more diverse in origins than other genres.

Metal on the Map

Metal is a very diverse genre, no surprise given that it comes from so many different regions of the world. We've created an interactive map using Plot.ly to showcase some of the bands present in our data. The data for this map has been transformed using the same process as the previous choropleth maps. Click on a country to listen to a local band!

Metal is currently the most global genre in the Gracenote music database as uncovered by the Applied Research team in its work to explore new ways to augment traditional data sources. However, we don't yet have metadata about Metal bands from countries in Central Africa and others like Bhutan and Papua New Guinea, so there is still work to be done!

In addition to augmenting Genre and Origin metadata, we can use this data for a number of other applications. It can be used to study trajectories of subgenres in specific regions that can power music recommendations. Local trends can be observed, potentially helping artists find new regions of the world to promote their music. Machine listening on audio could help understand how artists incorporate regional influences that are not characteristics of the genre. Stay tuned for more analysis and insights from our data vaults at Gracenote!

We’d love to hear from you in the comment section below.