When it came to using AWS (Amazon Web Service) in conjunction with our on-premise infrastructure, the Gracenote team quickly realized that EC2 (Amazon Elastic Compute Cloud) hosts in AWS would need to resolve names of on-premise systems and vice-versa. We were pretty confident this was an already-solved problem so we scanned the internet for a comprehensive end-to-end solution. After searching with no luck, we decided to design something ourselves. Now we’re sharing our solution with all of you in hopes it will save you time and headaches. If you use AWS in conjunction with on-premise infrastructure, then this blog post is for you.

The obvious answer was Route53 from Amazon - a highly available and scalable cloud DNS web service.

However, the more we looked at it, the less Route53 made sense. Instead, we came up with the following:

A central VPC can host shared services that all other VPC hosted systems can access. Not needing to deploy the same service into each VPC helps reduce costs. We still need to solve for a situation where the Central VPC goes down. However, that is beyond our scope here and would require another blog post or two.

Our VPC Setup: (As diagrammed by my daughter. I told her that if she drew this up, I'd buy her ice cream.) 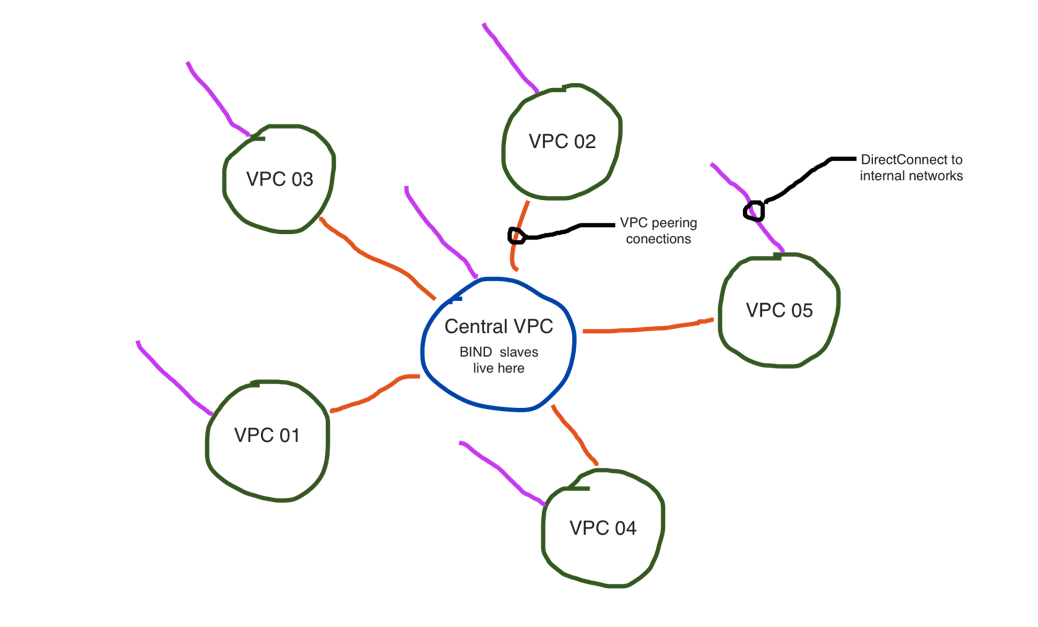 Note about shared services. While they represent single points of failure, without them, the costs become prohibitive. Virtual Machines share hosts, Docker containers share Docker hosts, virtual hosts share Apache web servers, EC2 instances share hypervisors, cell phones share towers and so on. However, a question remains: how do we architect around a shared service failure? That topic is beyond the scope of this blog as well.

We could have set VPC DHCP options to point to Amazon-provided DNS (i.e. Route53). However, the following questions would remain:

This is not about Docker containers, this is about architecture. Since Route53 was not a good fit, we decided to build BIND slaves in AWS to support our requirements.

When a VPC is created, it is given a default DNS server that all VPC EC2 instances will use to resolve names. However, if your AWS VPC is connected to your internal network and you expect EC2 instances to be able to resolve names of internal systems in your data center or office, then the default VPC resolver cannot help - it does not know the internal DNS and you cannot log in to it and configure it to do forwarding.

The solution? Override the default VPC name resolver and configure the VPC and all EC2 instances to know what name resolvers to use. This can be done using AWS Cloudformation templates. Cloudformation gives developers and systems administrators an easy way to create and manage a collection of related AWS resources, provisioning and updating them in an orderly and predictable fashion.

Here is a Cloudformation sample that defines specific name servers that all VPC EC2 instances can use.

Once you add this and update the Cloudformation template, all VPC EC2 instances will, in a few minutes thanks to DHCP, get the three domain name servers as their resolvers. However, this creates the following problems:

Infrastructure ideally should be robust, dependable and as maintenance-free as possible. We certainly do not want to constantly deal with these issues. Rather, we want a way to have static private IP addresses in AWS to assign to the BIND server.

We considered putting an internal ELB (Elastic Load Balancer) in front of it but decided that would not work. Resolvers need to be accessible via an IP address, not a Fully-Qualified Domain Name (FQDN) and ELBs only expose a FQDN. In general, with TCP/IP networks (the Internet and most networks) everything communicates via IP addresses, not names. Names are used as an IP address abstraction because it is easier to remember gracenote.com than, say, 209.10.40.1. The latter is an IPv4 address example. An IPv6 address, e.g. 2001:0db8:85a3:0000:0000:8a2e:0370:7334, would be even harder to remember. While an IPv4 or IPv6 address name can be gracenote.com, the only way to know that is to use a resolver to look it up. To start looking up names, then, you have to know a resolver's IP address, not its FQDN.

As mentioned earlier, we do not want to constantly change resolver IP addresses. Google uses the easy-to-remember "8.8.8.8" IPv4 address as a public resolver. If it were to change, numerous systems would break. For similar reasons, we want our internal resolvers to have static IP addresses. But how to get a static private IP address for a resolver EC2 instance running inside an AWS VPC? You cannot use an EIP (Elastic IP) since EIPs are public, not private, IPs. Our solution was to create an ENI (Elastic Network Interface) and “hard-code” a private IP address for it.

Something to note is that, when you create a VPC, Amazon takes the parent subnet's lowest IP addresses for internal use. For example, if your VPC's parent subnet is 10.0.0.0/24, you can further divide that into the following:

Amazon will then take 10.0.0.0-7 (for example) for its internal use, which then becomes the default resolver they set up in your VPC and anywhere else.

We decided to carve up the VPC's parent subnet in such a way as to reserve and isolate the lower part. For example:

To prevent EC2 failure, we took the following steps:

# THe AWS Region is the AWS zone with out the last character
awsRegion=${awsZone::-1}

However, one problem remains. We are now able to launch EC2 instances and ensure they have static private IP addresses. We also put them in Autoscaling groups of Min 1 Max 1 to ensure they come back if they die. However, the instances are not yet resolvers as no software has been installed on them for that purpose. We then installed Chef, BIND9, AWS S3 and a cron job to make this happen.

Next, we wrote a BIND9 cookbook wrapper and uploaded it to an S3 bucket. When an EC2 instance boots, it downloads the cookbook from the bucket. Then a cron job checks the S3 bucket at regular intervals and converges the cookbook. If we want to change something we upload a new cookbook file to S3. Now we have a resolver with a static private IP address. If you want to check out the Chef cookbook, here it is:

Finally, we put our resolver's static private IP address in the AWS VPC DHCPOptions mentioned earlier. We not only put the IP address of the resolver we built in the VPC, we also added the addresses of resolvers we have on-premise since things in our VPC can talk to things on our non-AWS internal network.

So how do we set hostnames in a dynamic environment? How do they talk to each other? That is subject matter for another Gracenote Tech Blog post coming soon. Thanks for reading.