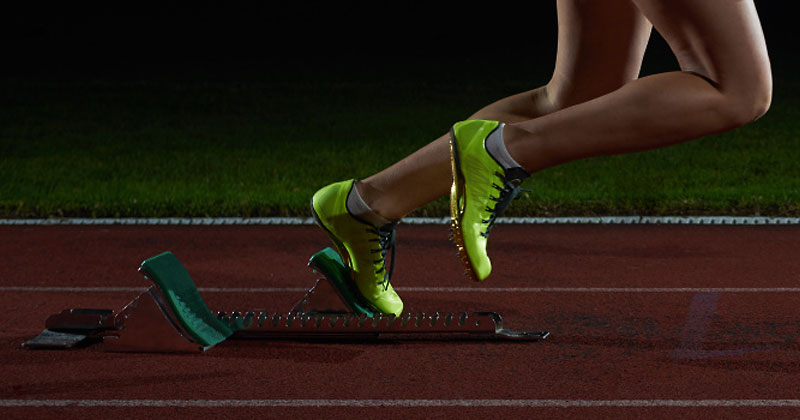 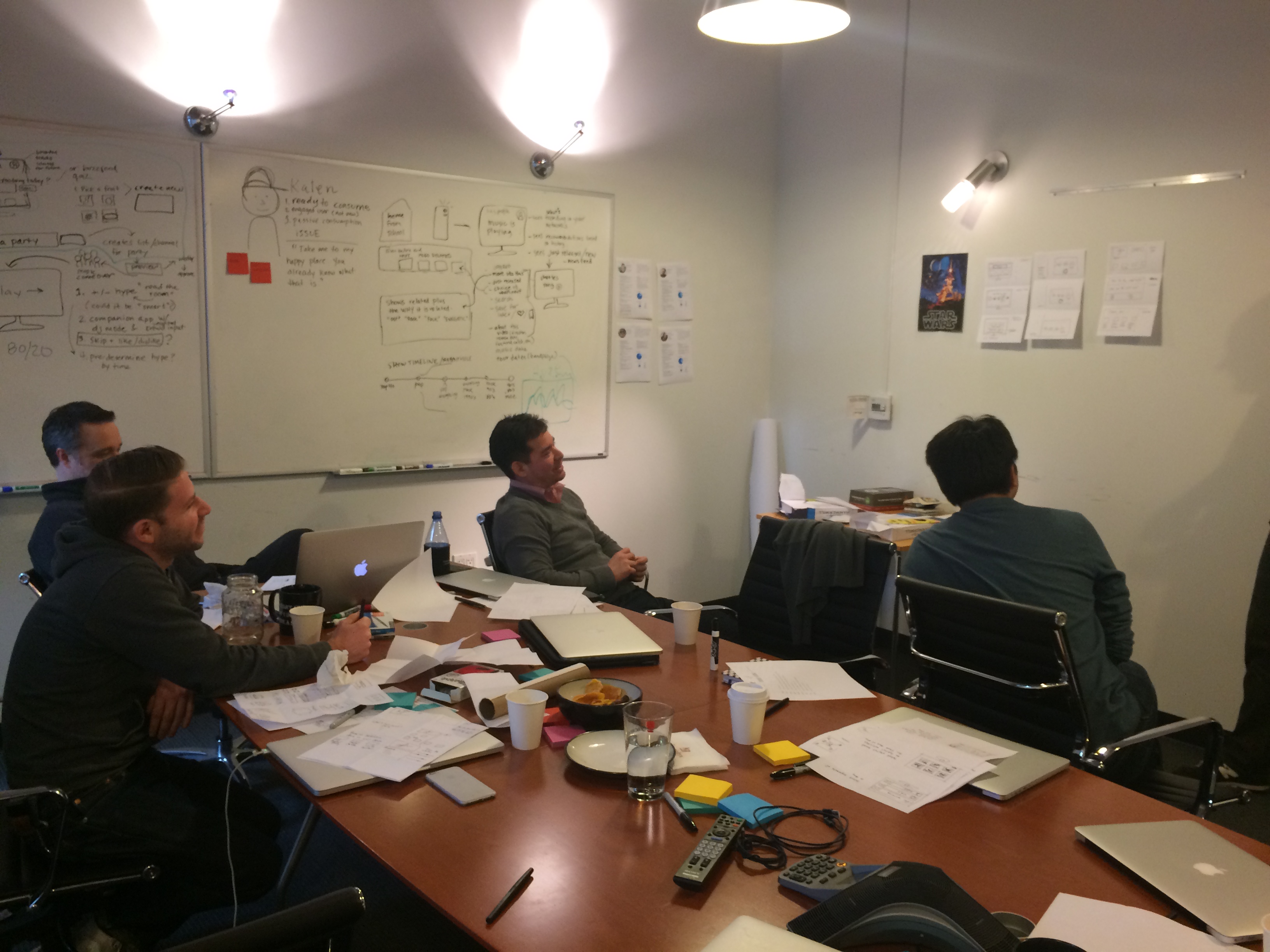 This blog post takes a closer look at the Design Sprint originally conducted in early 2016 that helped us identify specific end user needs ahead of developing these new offerings.

What is a Design Sprint?

A Design Sprint brings together a group of designers, developers and product owners for five intense days dedicated to tackling a particular problem. The process kicks off with the group learning everything they can about their design problem. Over the next three days, they then sketch, discuss, debate and decide what ideas are working best. And finally, on the last day, they conclude by prototyping their ideas and actually testing them with real users.

Market research shows that music video streaming has increased by more than 100% in the last year and continues to rise as consumers listen to music on devices with screens. Based on this market trend, we saw a ripe opportunity to create a richer way for consumers to enjoy music videos. Gracenote brings to the table databases containing massive troves of music and video metadata with dozens of attributes (song, artist, mood, genre, etc.) that allow users to discover new artists or create their own music video stations based on listening history and preferences.

In order to investigate the opportunity, Gracenote’s UX Design team conducted a Design Sprint bringing together the following people:

By bringing together a multifaceted group, the expectation is for a certain “magic” wherein the whole becomes greater than the sum of its parts in tackling the common problem.

The Design team met over an intense 5 days to identify new and innovative ways of combining music and video:

Here is more detail on the Design Sprint process.

Monday: Identifying and Analyzing the Challenge

Day one, Monday, was all about learning. The team spent the first part of Monday analyzing our design challenge and learning as much about it as we could.

Given the popularity of music videos, we set out to determine how might we combine our GOET (Genre, Origin, Era & Artist Type)/Mood Music data with music videos to create an engaging experience for both teen and adult users. By breaking down the challenge into segments, we were able to identify where our participants’ perspectives would come in handy.

This segment of the Design Sprint assessed our potential product’s viability. According to Nielsen, 56% of the total music streams during first six months of 2015 were in video form, an increase of 109% compared to the year before. While the growth in the consumption of audio streams was also pretty significant at 74%, it’s clear more and more people are gravitating toward online music videos. 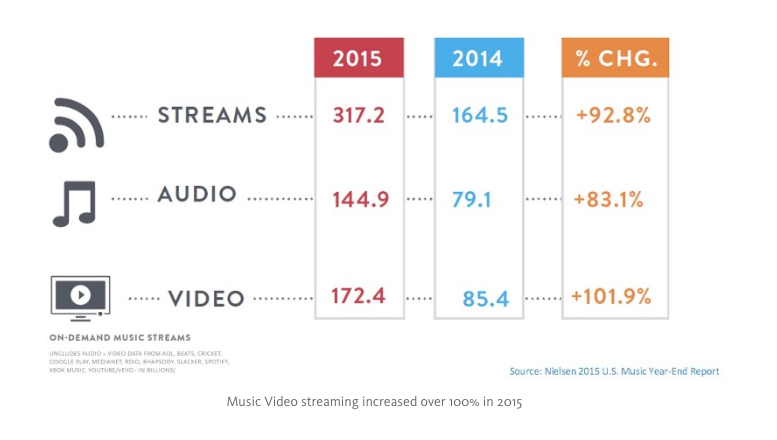 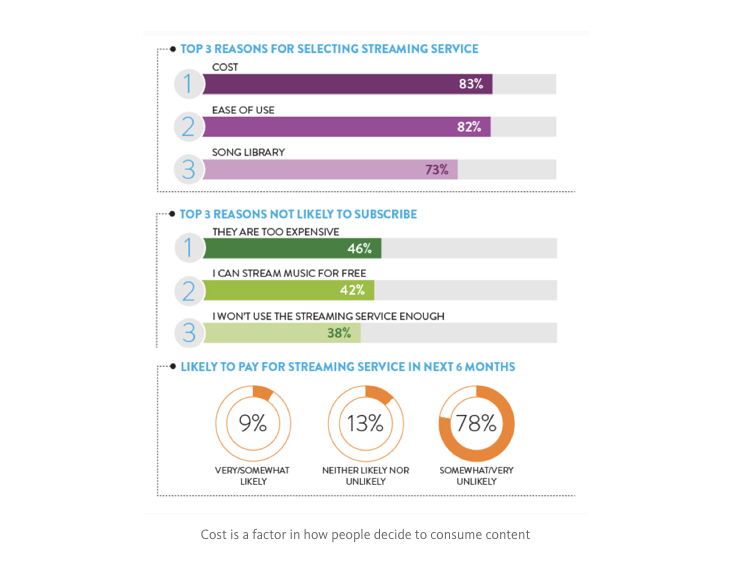 This segment assessed our potential product’s feasibility. It sought to answer the question, “What are the technical challenges and opportunities as we attempt to combine our Genre, Origin, Era & Artist Type and Mood metadata with music videos?”

This segment of the Sprint assessed our potential product’s desirability. We wanted to produce an experience for watching music videos that delighted our users and was unlike anything currently on the market.

The final piece of our problem statement led us to conduct research around our potential end users. Our goal was to not just satisfy, but to delight our prioritized users, thereby ensuring we would also delight a wider set of users.

Four distinct use-cases resulted from the research we conducted in the weeks leading up to the Sprint. Two of our user groups were heavily invested in watching live music videos  —  a use-case we determined was technically less feasible than focusing on users mostly interested in narrative, MTV-style videos. Thus, the two user groups interested in experiences built around narrative style music videos were chosen as the top priorities. For the purposes of this exercise, we created personas for “Mari” and “Kalen” to represent these two user groups. 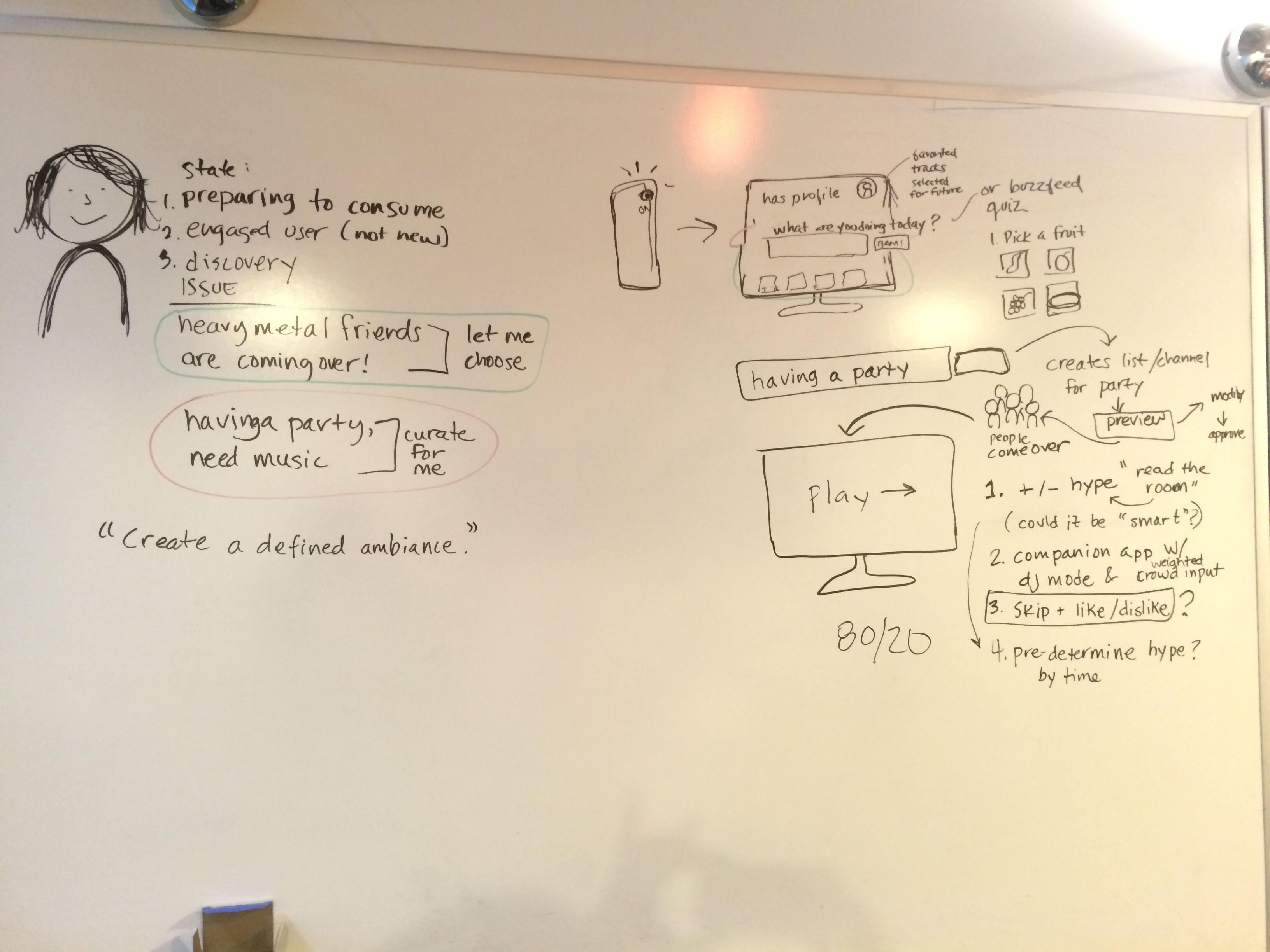 Our first journey map explored step-by-step how Mari would go about creating a new music video station. Putting ourselves in Mari’s mindset, we used the following scenario:

“Mari is a big fan of K-Pop and she uses our music video product often to stream videos by her favorite K-Pop artists. However tonight, she’s hosting a party at her house for some co-workers who are all really into heavy metal. How will she create a new station that will enhance the mood at her party while consistently entertaining her guests?”

As we worked on Mari’s flow through the application, the group made a significant discovery regarding a potentially innovative feature. The “Hype Button” — later renamed the “Energy Meter” — allowed users to modify the music’s tempo from super energetic to calm and dreamy. Mari could use this feature to both jump start her party’s energy or signal when she was ready to wind things down. 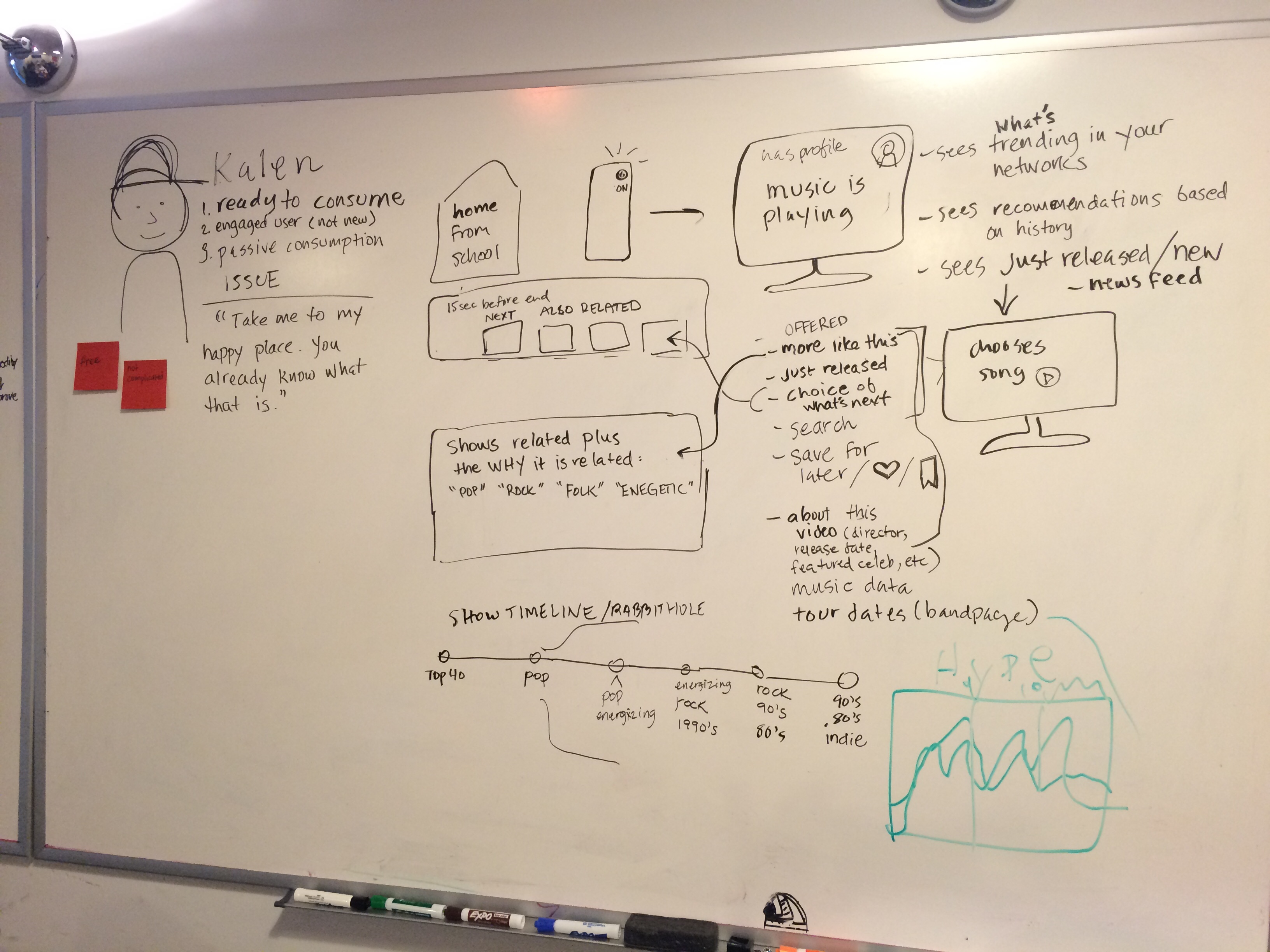 The second journey map focused on basic playback functionality and how we might augment the typical experience. Our research indicated that users felt YouTube could be a time suck. We debated whether this was really a complaint or a guilty pleasure point admission. We concluded that perhaps offering a feature that allowed users to feel as though their music video consumption was more guided or productive might result in them feeling less guilty about spending time with the product. After analyzing Kalen’s journey, we generated ideas around a “Timeline” feature enabling a user to pivot at any point in the session to a new station or dive deeper into an artists’ biography, tour dates or buy merchandise.

The team determined that a clear business opportunity existed and two features stood out as potentially adding real value to the experience: Energy Meter and Timeline.

Looking at our user journey maps from the previous day, we segmented the story out to focus on smaller sections of the user’s flow on day two.

Then we used a few activities to generate ideas:

The team pinned up and discussed the Mini-Storyboards to see how engaging or innovative the ideas might be. We repeated this process for both Mari’s and Kalen’s journey maps.

Wednesday: Deciding on the Best Ideas 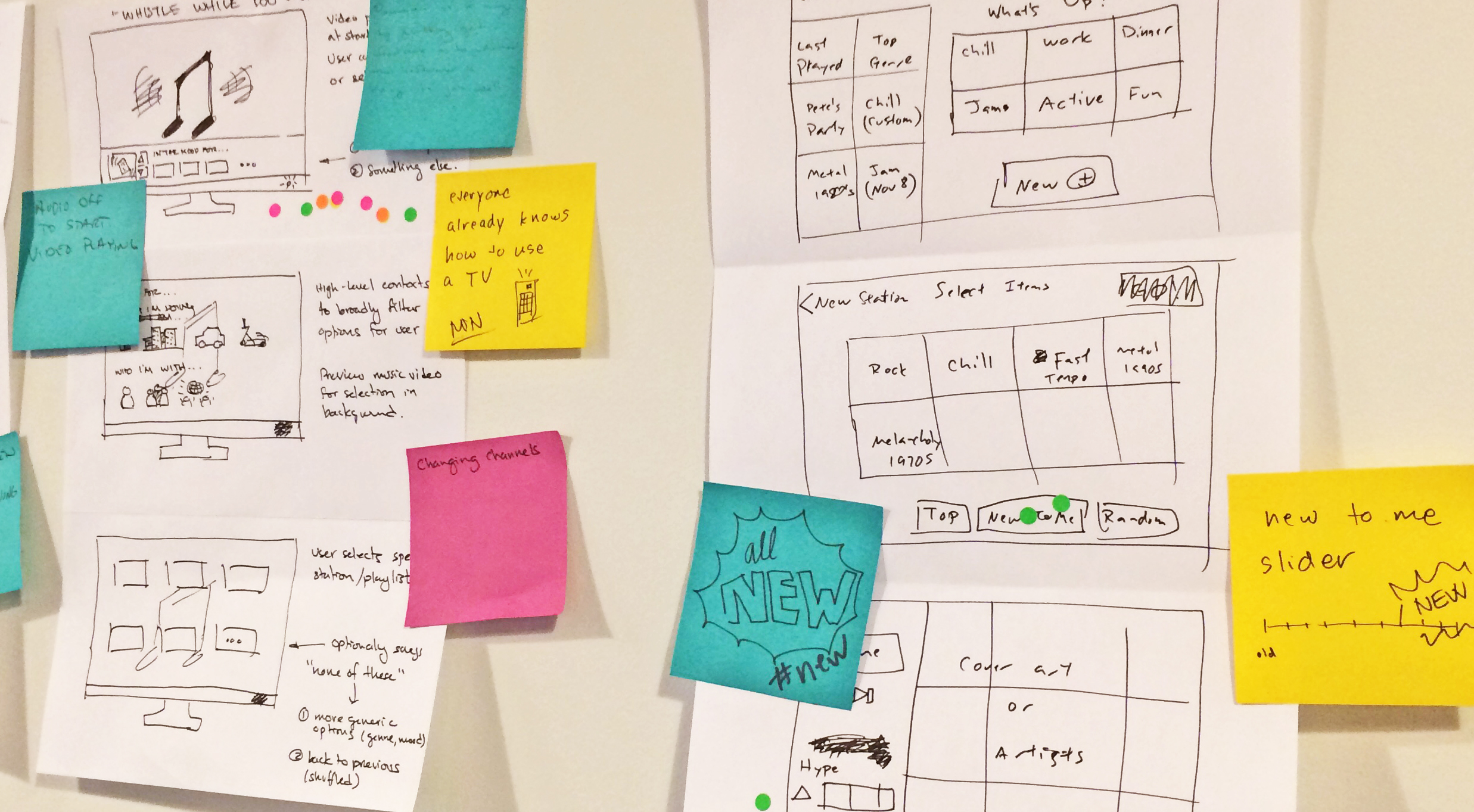 We started by reviewing our Mini-Storyboards which hung gallery-style on the walls of our Sprint room. Each team member walked around and affixed stickers to the concepts he or she felt had the most potential for success. Once we could collectively see the most popular ideas, we set about discussing the merits of those concepts.

Interestingly, a pattern in both sets of sketches emerged. Of the two most popular concepts, one was “straight-ahead,” while the other was “out there.” The straight-ahead concept was one we could easily implement and closest to what we imagined the product might resemble at the beginning of the week.  The “out there” concept was innovative but it was difficult to prototype quickly and raised many feasibility questions. We made the decision to proceed with and prototype the “straight-ahead” concept.

We then made a detailed flow of each screen we wanted to prototype. Given that Mari’s user story centering on the creation of a new music video station for a party was the most active, we decided to prototype the screens needed to complete that scenario. We also thought it would give us the opportunity to gain some clear insights into the Energy Meter and Timeline features.

As we sketched out each screen for Mari’s scenario, we came up with our “Station Creation” concept. The prototype showed a series of questions about the user’s activity as well as the number and type of people the user was with. As the user made choices (“Who are you with?” and “What activity are you up to?”), the application made suggestions for types of music video channels that fit the criteria.

A final activity called Three Words helped us narrow in on what we hoped we’d hear from our test users on Friday. The group threw out words we would want to hear our testers use to describe their experiences during the test sessions. The team generated lots of adjectives ranging from “fun” and “cool” to “elegant” and “delightful.” At the end of the exercise, we decided to focus on “delightful,” “intuitive” and “useful.”

The group moved forward with the design concept we could most easily prototype and test in the short-term and design and implement in the long-term. 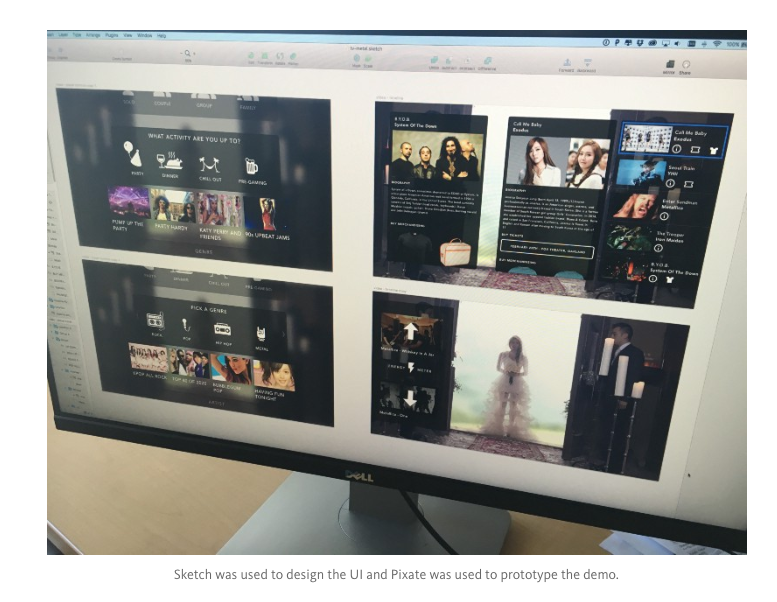 Thursday or day four was mostly spent designing and prototyping a demo application which would be realistic enough to be shown to users in our test sessions. The design team used Sketch to create visual mock-ups and Pixate to create the interactive prototype for testing.

We conducted the user test session on the Sprint’s final day in a conference room with a webcam set up to capture the users’ facial reactions and discussions. Another webcam was mounted behind the users to capture their interactions with the UI. Both video streams were recorded for later viewing. Test observers congregated in an observation room and watched the tests via a video conferencing tool.

Six users were tested using our prototype. The test users were screened and selected based on how well they fit the targeted user group (age, familiarity with competitor products and interest in watching music videos).

At the outset of this exercise, we asked each of our test users if they had a cable TV subscription. All testers indicated they were no longer cable subscribers. In a follow-up survey, we asked if the testers would use our music video product if it came bundled with a cable subscription they were already paying for. On an encouraging note, 100% of testers responded positively. The next question was whether the product would motivate them to re-subscribe to cable. To this question, 67% of testers answered yes.

From our Design Sprint, we learned an outstanding “lean-back” user experience for music videos is possible and that a few of our ideas resonated with testers. Key takeaways from the week:

From this Design Sprint, we learned a great deal in a short time about user needs. This intelligence ultimately helped us understand the various consumer use cases for music on TV which helped refine our latest music video product offering.