With 100 days to go before the 2018 PyeongChang Games opening ceremony, it’s time to present Gracenote Sports’ latest Virtual Medal Table Olympics predictions. This report updates the medal table based on current performance results data and calls out changes in the standings since our initial publication in February. In addition, we take a more in-depth look at Germany’s expected resurgence in next year’s Winter Games, explore what the medal table might look like if Russia does not compete and focus on the potential stars and fast-improving competitors amongst participants. 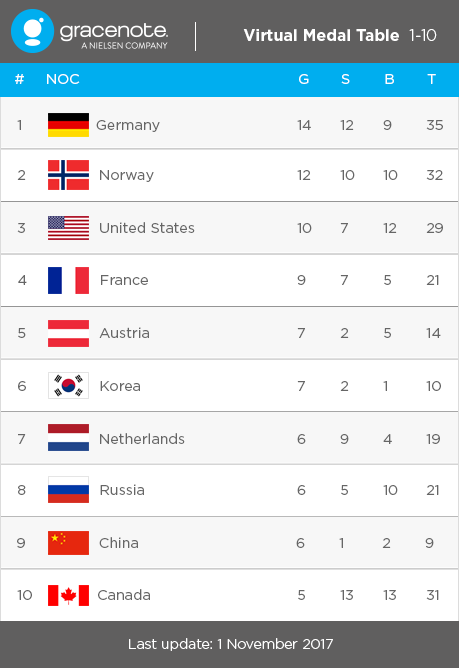 The Virtual Medal Table considers results data from critical competitions posted by all athletes since the last Winter Games. Based on the VMT, the most likely stars of next year’s Winter Olympics are:

During the 2016/2017 alpine skiing season, young Austrian skier Christine Scheyer consistently finished in the top-15 of the Downhill and Super G World Cup events in which she took part. Her only podium finish was in the Alternmarkt/Zauchenzee race in January but her consistency in her first full World Cup season highlights her as one of the rising stars with a shot at an Olympic medal next year. The Gracenote Sports Virtual Medal Table currently ranks Scheyer 7th in Downhill.

Mari Laukkanen won her first World Cup races in March 2017, emerging victorious in both the 7.5km sprint and 10km pursuit events in Holmenkollen. Her results over the last year have pushed her into Olympic medal reckoning and the VMT currently ranks her 7th best over the 10km pursuit and 11th in the 15km individual events.

Aged just 17 at the time, Chen posted impressive results in four major competitions in 2016 and 2017 before finishing in sixth place at the World Championships in April 2017. The VMT currently ranks Chen in fifth position for next year’s men’s singles event at the Winter Games but, given his age and senior results last season, he could be a dark horse for the podium.

Two podium places in major events in 2017 and a fifth place at the World Championships has brought Gremaud into the reckoning for an Olympic podium place in slopestyle. Still only 17, Gremaud’s performances in 2017 have put her in 11th place on the Virtual Medal Table and she is likely to improve further before the Winter Games begin in February.

Eight top-10 finishes including a second place in Lahti have pushed Finn Eero Hirvonen into the limelight in the sport of Nordic Combined. Hirvonen is currently ranked 11th by the VMT but, at just 21 years old, he is still on the rise.

A bronze medal and two sixth places at this year’s World Championships brought 17 year old Kim Ji Yoo into the Virtual Medal Table top-8 for both 500m (currently sixth) and 1000m (eighth). The former World Junior champion and Youth Olympic Games gold medallist could be ready to cause a shock at her home Winter Games in 2018.

Two World Cup wins at the end of the 2016/2017 season were Dai Dai Ntab’s best results in his first senior season on the World Cup circuit. Ntab didn’t consistently perform in that first season but his results are good enough to place him sixth on the VMT for the men’s 500m, albeit behind two of his compatriots.

Similar to the Rio Summer Games in 2016, Russia is facing yet another potential ban. However, it appears more likely Russia will be allowed to participate in PyeongChang. Gracenote’s Virtual Medal Table currently predicts Russia will come in at eighth place overall.

The projected top four of the medal table when ordered on golds would therefore remain the same as our current forecast but the Netherlands would be predicted to move up two places to finish fifth, above Austria and host nation South Korea.  This move would move Austria to sixth and South Korea to finish seventh place. 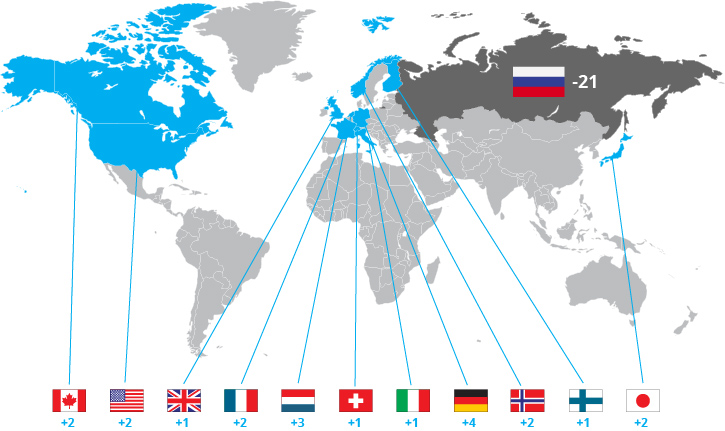 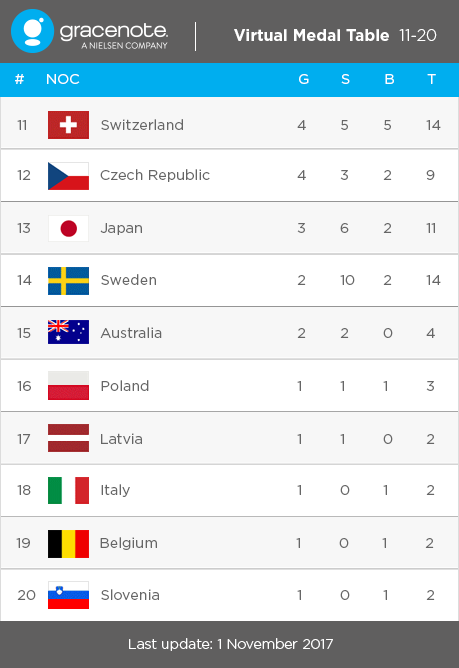 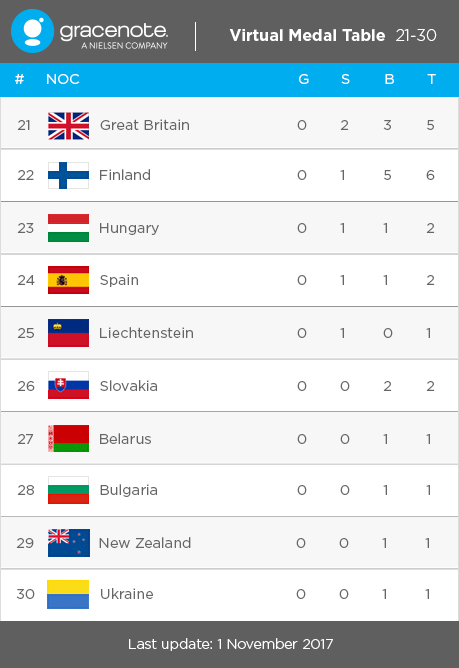 Gracenote’s Virtual Medal Table is a statistical model based on individual and team results in previous Olympics Games, World Championships and World Cups to forecast the most likely gold, silver and bronze medal winners by country. This information is presented in simple to understand predictions and seamless data feeds that enable broadcasters, media publishers and pay TV operators to deliver unique Olympic-focused stories across Web, mobile and broadcast properties.

Today, Gracenote Sports offers rich data on 4,500 of the world’s most popular leagues and competitions as well as a deep trove of historical Olympics information going back to the very first modern games in 1896. For a closer look at the full Virtual Medal Table, its features and methodology, please visit: http://sportsdemo1.gracenote.com/documentation/vmt.