The final countdown to the 2018 Winter Olympics is on.  With the PyeongChang Games opening ceremony only 30 days away, Gracenote Sports presents its latest Virtual Medal Table (VMT) predictions on the expected top five performing countries, possible impact of the recent ruling on Russia and rising star athletes to watch. With this update, we are also highlighting host nation South Korea’s projected performance and how Japan is coming into form as the Games approach.

This report updates the Medal Table last published on November 1, 2017. 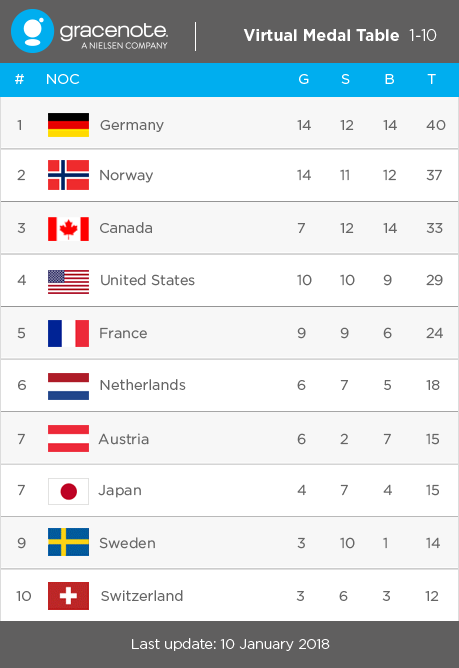 On December 5, the International Olympic Committee (IOC) banned Russia’s National Olympic Committee (NOC) from the 2018 Winter Games in PyeongChang. The IOC also announced that it will allow some of Russia’s athletes to compete under a neutral flag provided they can show that they are not associated with the doping program for which Russia’s NOC has been banned. Since it is currently unclear which athletes will be allowed to take part under the Olympic Athletes from Russia (OAR) banner, we have removed all 19 of the projected OAR medalists from this version of the Virtual Medal Table. The athletes who are allowed to compete will be included in our final Virtual Medal Table release just before the Games begin.

The current forecast of 19 medals (4 gold, 6 silver and 9 bronze) for the Olympic Athletes from Russia NOC would be enough to place them in 6th place on our latest VMT projection. The countries on our Virtual Medal Table which benefit from Russia’s absence are Germany, whose projected medal total increases by five (+5), Norway (+4), Canada (+2), France (+2), Italy (+2) and Finland, Great Britain, Japan and the Netherlands (all +1). The Netherlands (+2), Canada (+1) and Japan (+1) have inherited the virtual gold medals from the Russian absentees in this month’s table. 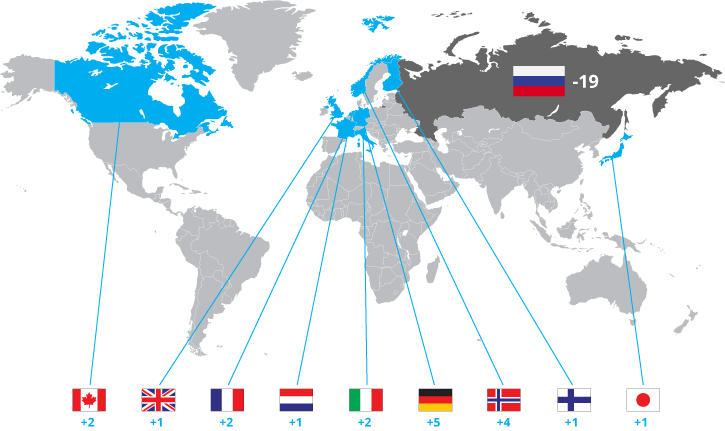 The Top Five Medal Winning Countries
Note that the below ranking is based on total medal counts by country.  For a view of predictions ordered by gold medals per country, please refer to the graphics at the end of this article.

Since World Cup events leading into the Winter Games are taking place weekly, the gold medalists forecast by the Gracenote Virtual Medal Table change regularly. There have been a total of 15 changes of projected gold medalists since November 1. Below are a selection of athletes to pay attention to:

Victory in the Lake Louise World Cup super G followed by third place in St. Moritz has moved Tina Weirather up to the gold medal position in the women’s super G event, ahead of Switzerland’s Lara Gut. If Weirather wins in PyeongChang, she will be the second person to win Olympic gold for Liechtenstein. The first was her mother, Hanni Wenzel, who won the downhill and giant slalom at the Lake Placid Winter Games in 1980.

Mikaela Shiffrin has dominated alpine skiing’s slalom event, winning 21 of her last 26 World Cup races and was therefore already a virtual gold medal winner in PyeongChang. She has also risen to virtual gold in the giant slalom after winning this season’s World Cup races in Courchevel and Kranjska Gora.

In one of the potentially great battles at the Winter Games, Kaillie Humphries has taken over the virtual gold from American driver Elana Meyers Taylor in the women’s bobsleigh. Based on our most recent projections, Meyers Taylor has dropped to the silver medal position previously occupied by Humphries after the Canadian finished ahead of the American in all three World Cup events in November.

Johannes Lochner has overtaken Francesco Friedrich and Latvia’s Oskars Melbardis in the four-man bobsleigh and has moved from virtual bronze to gold. Lochner’s rise is based on big wins at two of the four World Cup events this season. Friedrich is now forecast silver and Melbardis has dropped out of the top three altogether.

Victory in the 10km freestyle at the Toblach World Cup has put Charlotte Kalla into the virtual gold for cross country skiing ahead of Norwegians Ingvild Flugstad Østberg and Marit Bjørgen. Norwegian and Swedish competitors now occupy the top five positions on the Virtual Medal Table for this event.

By winning the 15km freestyle World Cup race in Davos, Manificat has moved ahead of Norwegian Martin Johnsrud Sundby in the Virtual Medal Table projection for the event at the PyeongChang Winter Games.

After winning the sprint event at the Lillehammer World Cup event in December, Johannes Høsflot Klæbo has moved into the virtual gold medal position ahead of compatriot Petter Northug. The Norwegians are expected to dominate the men’s sprint in PyeongChang.

Marie Martinod won the Copper Mountain halfpipe competition in December and put her ahead of world champion Ayana Onozuka of Japan on the Virtual Medal Table projection.

Natalie Geisenberger, who was forecast to win silver in the women’s singles luge, has swapped places with Germany’s Tatjana Hüfner. Geisenberger won three of the first four World Cup races of 2017/2018 season while Hüfner was victorious in only one.

After becoming only the second man in the 65-year history of the prestigious Four Hills Tournament to win all four of the events in that competition, 2014 double Olympic gold medallist Kamil Stoch is the new virtual medal table leader for ski jumping’s large hill at the Winter Games.

World Champion Nao Kodaira has won all seven World Cup races over 500 meters this season. Because of this she has moved ahead of 2014 Olympic champion and 2016 world champion Lee Sang-Hwa (South Korea) as the favorite to win Gold in PyeongChang.

Projected to win 10 medals total, including seven golds, host nation South Korea appears poised to finish sixth on the Gracenote Virtual Medal Table. If the country hopes to post its best overall Winter Games performance, it will need to surpass the 14 overall medals won in Vancouver 2010.

The sports of short track and speed skating are expected to produce South Korea’s best medal chances. However, the country also has opportunities to reach the podium in bobsleigh, skeleton and snowboarding. 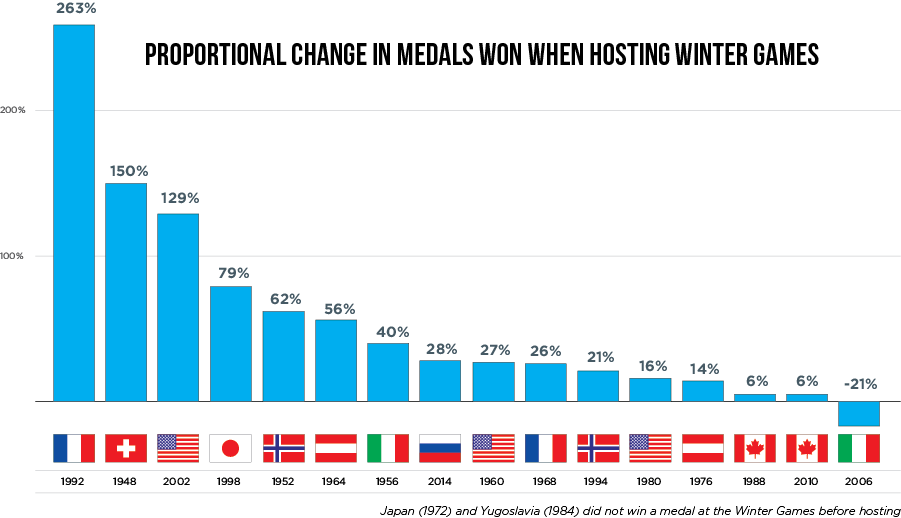 Japan is expected to see the biggest change in its total medal haul since our last VMT predictions in November. The country is projected to improve to 4 golds, 7 silvers and 4 bronze from 3 golds, 6 silvers and 2 bronze in November. Based on this, Japan has moved up three places on the table into the top-10 if ordered on gold medals. Here are the Japanese athletes who have improved within the top-3 or broken onto Gracenote’s virtual podium over the last two months: 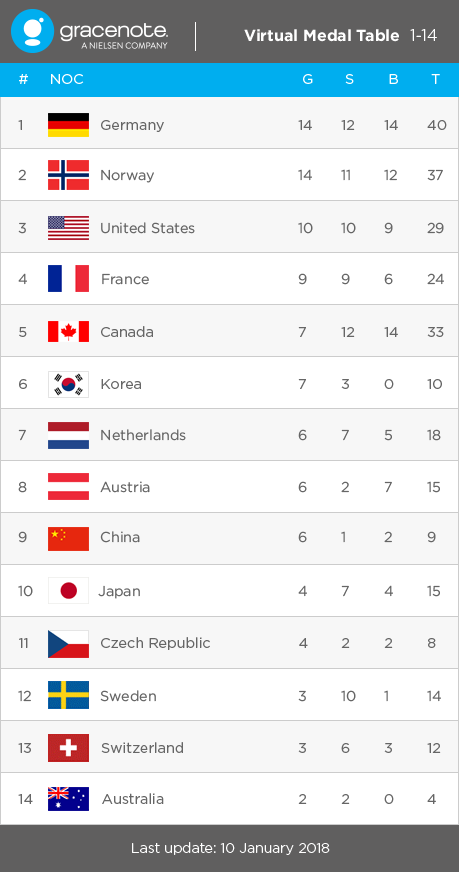 Gracenote’s Virtual Medal Table (VMT) is a statistical model based on individual and team results in previous Olympics Games, World Championships and World Cups to forecast the most likely gold, silver and bronze medal winners by country. This information is presented in simple to understand predictions and seamless data feeds that enable broadcasters, media publishers and pay TV operators to deliver unique Olympic-focused stories across Web, mobile and broadcast properties.

Gracenote, a Nielsen (NYSE: NLSN) company, provides music, video and sports content and technologies to the world’s hottest entertainment products and brands. Gracenote is the standard for music and video recognition and is supported by the largest source of entertainment data, including rich data on 4,500 of the world’s most popular leagues and competitions as well as a deep trove of historical Olympics information going back to the very first modern games in 1896. For a closer look at the full Virtual Medal Table, its features and methodology, please visit: http://sportsdemo1.gracenote.com/documentation/vmt.  For more information on Gracenote Sports, visit: https://www.gracenote.com/sports/global-sports-data/.