UPDATE: Due to the impact of the global COVID-19 pandemic, there is potential for the Tokyo Summer Games to be more unpredictable than normal. As usual, Nielsen Gracenote’s Virtual Medal Table has used the data available since the last Summer Games to identify the athletes who are likely to be successful at the upcoming Games. But the projection contains more uncertainty than usual because of the pandemic. 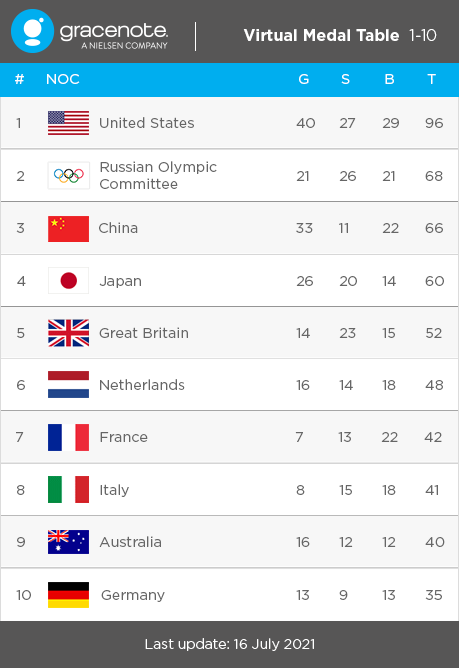 (Tokyo 2020 projection: 96 medals, 2016: 121 medals)
The U.S. is expected to once again top the Summer Games Virtual Medal Table in Tokyo. The final Gracenote projection of 96 medals is 25 down on the total claimed by American competitors in 2016 when Team USA overperformed in comparison to the results data their competitors had recorded between Olympic Games. Team USA’s medals should come in 27 different sports, one short of the Olympic record of 28 (Soviet Union 1980, United States 2016).

(Tokyo 2020: 68 medals, 2016: 56 medals)
The athletes competing under the Russian Olympic Committee banner are forecast to win 68 medals in Tokyo and could therefore be competing with both China and Japan for second place behind the U.S. If this many medals are won, it would be a big improvement on the 2016 Olympic medal total by Russia and as good as the best Russia total since 2004.

(Tokyo 2020: 66 medals, 2016: 70 medals)
China’s total of 70 medals in 2016 was the country’s lowest return since 2004 and the current Gracenote projection for Tokyo 2020 is lower than this. However, many members of the Chinese Olympic team have not competed since 2019 and may therefore be underrated by the Virtual Medal Table. China edged Great Britain into second place in Rio by a margin of three medals. This time, host nation Japan and the Russian Olympic Committee competitors could challenge China for second place on total medals. The data suggests that China will be well ahead of both on gold medals though.

(Tokyo 2020: 61 medals, 2016: 41 medals)
Tokyo 2020 host nation Japan won a record-breaking 41 medals at the Rio Olympics in 2016 and Gracenote currently projects them to improve on that total by nearly 50%. The expected gains should come from a combination of more medals in all of Japan’s strongest sports and potential success in new and returning sports, like skateboarding, sport climbing and baseball, which hosts historically enjoy.

(Tokyo 2020: 52 medals, 2016: 67 medals)
In 2016, Great Britain became the first country to win more Olympic medals four years after hosting than they won at home. The Gracenote Virtual Medal Table projects a drop of 15 medals in Tokyo this year from their 2016 total of 67. The British team is therefore likely to drop out of the top-three medal winning countries but 52 medals should be enough to achieve a fourth successive top-5 finish. The reduction in medals for Britain is partially due to lower expectations in cycling – track, gymnastics – artistic and rowing amongst other competitions. In 2016, those three sports accounted for nearly one third of British medals (22). In 2021 however, these sports could produce as few as five podium places.

Countries Ranked 6 to 10 on the Medal Table

(Tokyo 2020: 48 medals, 2016: 19 medals)
The best-ever Dutch medal winning performance at a Summer Olympics was Sydney 2000 (25 medals). The current projection is for the Netherlands to comfortably beat this record at Tokyo 2020 with more medals forecast in athletics, cycling – track, cycling – road and sailing than ever before. Unlike 2000 when the record medal count was driven by multiple medals from a small number of Dutch stars, Gracenote’s projection for Tokyo 2020 suggests medals will be won by a larger number of competitors.

(Tokyo 2020: 42 medals, 2016: 42 medals)
At this year’s Summer Games, the data suggests that France should produce a medal winning performance similar to 2016. If France again wins 40 or more medals, it would be the fifth time that the French team has broken the 40-medal barrier. Three of those achievements came between 2008 and 2016. France appears poised to enjoy success in fencing, judo and athletics.

(Tokyo 2020: 41 medals, 2016: 28 medals)
Italy is projected to improve on its 2016 medal performance at Tokyo 2020 by 50% with 16 potential medals coming from fencing and swimming according to Gracenote. The addition of karate as a new Olympic sport also helps Italy as there are currently two Italians named as virtual medallists in that sport this summer.

(Tokyo 2020: 40 medals, 2016: 29 medals)
Australia has been eclipsed by Great Britain at each of the last two Summer Games and has not finished ahead of them since 2004. Despite a likely increase in the Australian medal total, it looks like the British will beat them again. Australia’s drop in performance at the last two Summer Olympics was mainly due to subpar results in swimming. Results since the 2016 Olympic Games suggest that the Australian team will perform well in swimming again and that will be crucial if they are to achieve this medal total.

(Tokyo 2020: 35 medals, 2016: 42 medals)
Germany is projected to under-perform in comparison to their results in the last three Summer Games according to the Gracenote Virtual Medal Table. The German team finished in the top-three in the first two Summer Games after reunification in 1990. They have since been overtaken by China (since 2000), Australia (2000 to 2008) and Great Britain (2008 – 2016). With the exception of 2008, Germany has tended to hang on to a top-five place on the medal table but they will probably need over 50 medals to achieve that this year.

The Gracenote Virtual Medal Table is a statistical model based on individual and team results in previous Olympics Games, World Championships and World Cups to forecast the most likely gold, silver and bronze medal winners by country. This information is presented in simple to understand predictions and seamless data feeds that enable broadcasters, media publishers and pay TV operators to deliver unique Olympic-focused stories across Web, mobile and broadcast properties. https://www.gracenote.com/virtual-medal-table/.

Gracenote, a Nielsen (NYSE: NLSN) company, is the world’s leading entertainment data and technology company. The hottest entertainment products and brands around the globe rely on Gracenote’s music, video and sports content and technologies. Gracenote is the standard for music and video recognition and is supported by the largest source of entertainment data, featuring descriptions of more than 200 million tracks, TV listings for 85+ countries and rich statistics from 4,500 sport leagues and competitions. Headquartered in Emeryville, California, Gracenote supports customers around the globe. For more information on Gracenote Sports, visit https://www.gracenote.com/sports/global-sports-data/.

Want to get in contact with Gracenote about our services?

This website uses cookies to improve your experience while you navigate through the website. Out of these, the cookies that are categorized as necessary are stored on your browser as they are essential for the working of basic functionalities of the website. We also use third-party cookies that help us analyze and understand how you use this website. These cookies will be stored in your browser only with your consent. You also have the option to opt-out of these cookies. But opting out of some of these cookies may affect your browsing experience.
Necessary Always Enabled

Any cookies that may not be particularly necessary for the website to function and is used specifically to collect user personal data via analytics, ads, other embedded contents are termed as non-necessary cookies. It is mandatory to procure user consent prior to running these cookies on your website.